What makes humans unique? This never-ending debate has sparked a long list of proposals and counter-arguments and, to quote from a recent article on this topic,

“a similar fate  most likely awaits some of the claims presented here. However such demarcations  simply  have  to  be  drawn  once  and  again.  They  focus  our  attention, make us wonder, and direct and stimulate research, exactly because they provoke and challenge other researchers to take up the glove and prove us wrong.” (Høgh-Olesen 2010: 60) 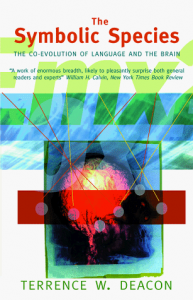 In this post, I’ll focus on six candidates that might play a part in constituting what makes human cognition unique, though there are countless others (see, for example, here).

One of the key candidates for what makes human cognition unique is of course language and symbolic thought. We are “the articulate mammal” (Aitchison 1998) and an “animal symbolicum” (Cassirer 2006: 31). And if one defining feature truly fits our nature, it is that we are the “symbolic species” (Deacon 1998). But as evolutionary anthropologists Michael Tomasello and his colleagues argue,

According to Tomasello and many other researchers, language and symbolic behaviour, although they certainly are crucial features of human cognition, are derived from human beings’ unique capacities in the social domain. As Willard van Orman Quine pointed out, language is essential a “social art” (Quine 1960: ix). Specifically, it builds on the foundations of infants’ capacities for joint attention, intention-reading, and cultural learning (Tomasello 2003: 58). Linguistic communication, on this view, is essentially a form of joint action rooted in common ground between speaker and hearer (Clark 1996: 3 & 12), in which they make “mutually manifest” relevant changes in their cognitive environment (Sperber & Wilson 1995). This is the precondition for the establishment and (co-)construction of symbolic spaces of meaning and shared perspectives (Graumann 2002, Verhagen 2007: 53f.). These abilities, then, had to evolve prior to language, however great language’s effect on cognition may be in general (Carruthers 2002), and if we look for the origins and defining features of human uniqueness we should probably look in the social domain first. 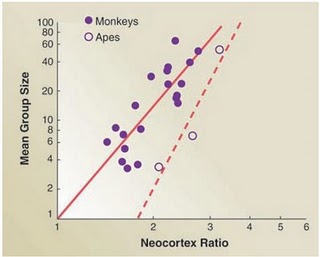 Corroborating evidence for this view comes from comparisons of brain size among primates. Firstly, there are significant positive correlations between group size and primate neocortex size (Dunbar & Shultz 2007). Secondly, there is also a positive correlation between technological innovation and tool use – which are both facilitated by social learning – on the one hand and brain size on the other (Reader and Laland 2002). Our brain, it seems, is essential a “social brain” that evolved to cope with the affordances of a primate social world that frequently got more complex (Dunbar & Shultz 2007, Lewin 2005: 220f.).

Thus, “although innovation, tool use, and technological invention may have played a crucial role in the evolution of ape and human brains, these skills were probably built upon mental computations that had their origins and foundations in social interactions” (Cheney & Seyfarth 2007: 283).

END_OF_DOCUMENT_TOKEN_TO_BE_REPLACED

Recently, David Burkett and Tom Griffiths have looked at iterated learning of multiple languages from multiple teachers (Burkett & Griffiths 2010, see my post here).  Here, I’ll describe a simpler model which allows bilingualism.  I show that, counter-intuitively, bilingualism may be more stable than monolingualism.

END_OF_DOCUMENT_TOKEN_TO_BE_REPLACED

Ever since its discovery in 1861, Broca’s area (named after its discoverer, Paul Broca) has been inextricably linked with language (Grodzinsky and Santi, 2008). Found in the left hemisphere of the Pre-Frontal Cortex (PFC), Broca’s region traditionally[1] comprises of Broadmann’s areas (BA) 44 and 45 (Hagoort, 2005). Despite being relegated in its status as the centre of language, this region is still believed to play a vital role in certain linguistic aspects.

Of particular emphasis is syntax. However, syntactic processing is not unequivocally confined to Broca’s area, with a vast body of evidence from “Studies investigating lesion deficit correlations point to a more distributed representation of syntactic processes in the left perisylvian region.” (Fiebach, 2005, pg. 80). A more constrained approach places Broca’s area as processing an important functional component of grammar (Grodzinsky and Santi, 2007). One of these suggestions points specifically to how humans are able to organise phrases in hierarchical structures[2].

In natural languages, “[…] the noun phrases and the verb phrase within a clause typically receive their grammatical role (e.g., subject or object) by means of hierarchical relations rather than through the bare linear order of the words in a string. [my emphasis]” (Musso et al., 2003, pg. 774). Furthermore, these phrases can be broken down into smaller segments, with noun phrases, for example, consisting of a determiner preceding a noun (Chomsky, 1957). According to Chomsky (1957) these rules exist without the need for interaction in other linguistic domains. Take for example his now famous phrase of “Colourless green ideas sleep furiously.” (ibid, pg. 15). Despite being syntactically correct, it is argued the sentence as a whole is semantically meaningless.

The relevant point to take away is a sentence is considered hierarchical if phrases are embedded within other phrases. Yet, examples of hierarchical organisation are found in many domains besides syntax. This includes other language phenomena, such as prosody. Also, non-linguistic behaviours – such as music (Givon, 1998), action sequences (Koechlin and Jubault, 2006), tool-use (cf. Scott-Frey, 2004) and tool-production (Stout et al., 2008) – are all cognitively demanding tasks, comparable with that of language. We can even see instances of non-human hierarchical representations: from the songs of humpback whales (Suzuki, Buck and Tyack, 2006) to various accounts of great apes (McGrew, 1992; Nakamichi, 2003) and crows (Hunt, 2000) using and manufacturing their own tools[3].