Despite being from the same city as Wintz, he and Sean didn’t collide until they both started an MSc in The Evolution of Language and Cognition, forcing them into the same local pub.  Unlike Wintz, however, Sean can actually speak Welsh, and has devoted his career to justifying the existence of minority languages.  Sean completed his PhD at the LEC at the University of Edinburgh, studying Evolutionary approaches to Bilingualism under Simon Kirby, Antonella Sorace and Kenny Smith.  He is currently working at the Max Planck Institute for Psycholinguistics.

Sean will probably just talk about how wonderful bilingualism is, as he used to in his old blog The Adventures of Auck.

Here’s Sean and Wintz enjoying a cup of orange juice at this year’s EvoLang conference. 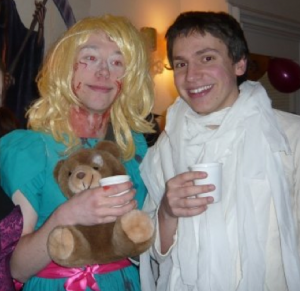