Christian is currently doing a PhD at Lancaster University on how infants understand ostensive communication. Prior to that he worked at the Max Planck Institute for Evolutionary Psychology and the Max Planck Institute for Cognitive and Brain Sciences as a research assistant, working with children and infants. He also  studied Evolution of Language and Cognition at the University of Edinburgh like so many others writing for this blog. Prior to this, he graduated in Psychology from the University of Glasgow. Although he occasionally pretends to be Scottish (or rather attempts, and fails miserably), he is actually German. But his German-ness is probably just as convincing as his Scottish-ness.

He is currently trying to figure out how it is that we can communicate. As he is writing these lines, he’s baffled how he acquired the ability to write, to speak, to listen, to understand, and read other minds in the first place. Unfortunately, he does not remember how it happened, so he is doing a PhD on it.

His main research interests are in ostensive communication, theory of mind, statistical learning in first language acquisition, developmental psychology, cross-situational learning, pragmatics, dialogue, and the like. Also, he’s got a keen interest in imitation, which is why he is using the third person in his profile page. Everybody else did it.

Here’s a picture of Christian drinking tea at the Dugald Stewart Building in Edinburgh at his graduation: 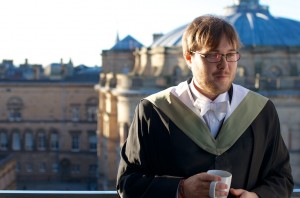 He has his own blog over at antipattern.net. There he writes about all sorts of things, but he figured his linguistics and psychology related posts would actually get read over here.