Michael Pleyer is a PhD student in English Linguistics at the University of Heidelberg, Germany. His dissertation project has the unwieldy title ‘Perspective and Perspectivation in Language and Cognition: A Cognitive-Linguistic and Cognitive-Developmental Approach‘. Before that, he studied English and German Philology as well as Psychology in Heidelberg and Nottingham. He was born in the beautiful city of Freiburg im Breisgau in the south-west of Germany but grew up in a little village on the northwestern slopes of the Harz mountain range in Lower Saxony.

Unlike his parents he can’t speak Swabian but tries to make up for his lack of dialect knowledge by frequently interrogating people (including all of his friends and people at parties) on their use of prepositions and vocabulary. That is, when he’s not telling them about some new experiments in the field of developmental psychology, comparative psychology, or cognitive science. As most of his friends for some strange reason do not share his fascination for language evolution and other geeky stuff he started a blog, Shared Symbolic Storage, and is also writing for Replicated Typo, probably focussing on the same topics he usually annoys his friends with. He’s also on Twitter, tweeting about cognitive science and the conferences he goes to.

Here’s a picture of Michael telling everybody how awesome Replicated Typo is at the 2012 Digital Humanities Conference. 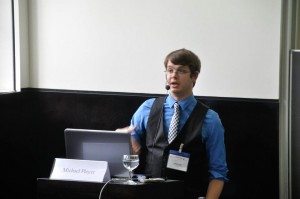