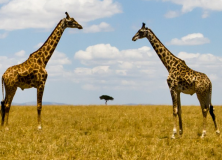 Last month saw the publication of a paper by James and I (our first paper!) on the so-called ‘nomothetic’ approach to links between language structure and social structure.  In it we review the recent trend of using large-scale cross-cultural statistical analyses to find links between cultural traits and social structures (e.g. Lupyan & Dale, 2010).  We show that statistical tests can be misleading because of the nature of cultural systems.  We also argue that using statistics alone does not provide strong explanatory power.  However, they can be a valuable part of a pluralistic approach to problems – especially generating hypotheses and as a catalyst for debate.  Other approaches can help support the suggestions made by nomothetic studies, such as experiments and models.

Perhaps as exciting, there are now some spurious correlations that are peer-reviewed!  These include the link between tonal languages and the presence of acacia trees, and word order being linked to the number of offspring parents have.

The paper is available here and is open access.  It’s part of a special issue on Language as a Tool for Interaction, and has some other interesting papers which I look forward to reading.

In the last post, I discussed some of the literature into experimental communication, with the intention of then following it up by looking at recent experiments done at Edinburgh (and beyond). But as Hannah pipped me to the post, with a great overview of the wide range of experiments into language evolution, I’ll instead limit this to two relatively recent papers on Human Iterated Learning (Kirby et al., 2008; Cornish et al., 2009)

Drawing from experimental approaches found in Diffusion Chain and Artificial Language Learning studies, Kirby et al (2008) show that as a consequence of intergenerational transmission languages “culturally evolve in such a way as to maximize their own transmissibility: over time, the languages in our experiments become easier to learn and increasingly structured.” In these experiments a subject is exposed to an alien language, made up of two elements within a finite space: meanings (consisting of a picture with three discernible elements: colour, shape and movement) paired with signals (consisting of a string of letters). Importantly, the subject is only exposed to a set amount of meanings (SEEN items), after which they are then presented with a group of meanings (some SEEN, some UNSEEN) without the corresponding signal — the goal being that they provide a response (be it the correct version or not). On completion of forming the meaning-signal pairs the experiment is repeated, except this time the new subjects are trained on the data provided by the previous generation. This continues until the experiment is finished, which in this case happened at generation ten.