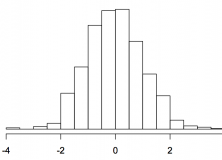 On the weekend I did an analysis about a recent paper by Caleb Everett linking altitude to the presence of ejective sounds in a langauge. In this post I look at the possible effects of contact and population size.  I find that controlling for population size removes the significance of the link between ejectives and elevation.

“contact tends to make languages lose ejectives, if they ever had them. The reasoning here would be that a language’s having (contrastive) ejectives implies that it has a large consonant inventory, which implies that it does not have a history of significant numbers of people having learnt it as a second language, since this tends to lead to the elimination of typologically rare features.”

We can test this in the following way: We can get a rough proxy for langauge contact for a community by counting the number of languages within 150km (range between 0 and 44).  If we run a phylogenetic genralised least squares test, predicting the presence of ejectives by elevation and number of surrounding languages, we get the following result (estimated lambda = 0.8169142 , df= 491, 489): 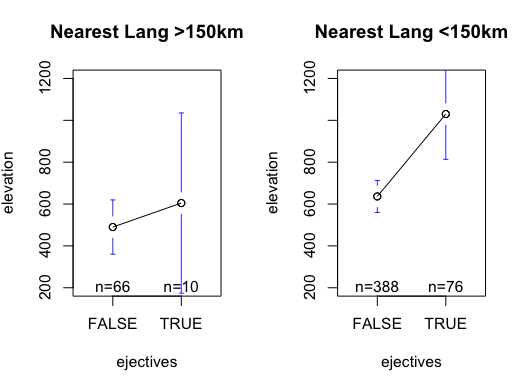 However, it’s not quite so simple, since we have to take into account the relative relatedness of languages.  If we count the number of distinct language families within 150km, then the significance goes away:

What about another proxy for contact, like population size (as used by Lupyan & Dale, 2010)?  I took speaker populations from the Ethnologue and ran another PGLS:

Now we see that neither variable is significant, though larger populations tend not to have ejectives.  That is, by controlling for linguistic descent and population size, the correlation between elevation and ejectives goes away.

In fact, a simple logit regression predicting elevation by elevation and log population results in the following:

We can see that, even if we don’t control for phylogeny, population size is a better predictor of ejectives than elevation (although Everett uses several measures of altitude).

I also wondered if the distance to the nearest language could be a proxy for contact.  Let’s put all the variables into one regression.

We can build the most likely causal graph (see my post here) for the data above.  This ignores the phylogenetic relatedness of langauges, but allows us to explore more complex relationships between all the variables.  Below, we see that elevation and ejectives are still linked, as Everett would predict. 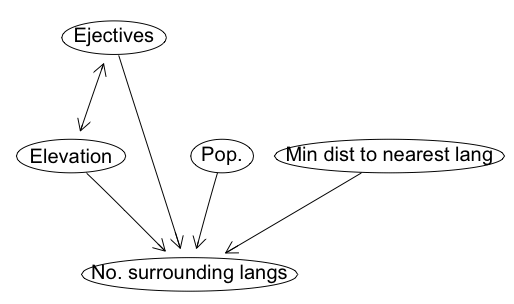 The stats I’ve presented here are just rough explorations of the data, not proof or disproof of any theory.  Here are some issues that are still unresolved:

Of course, laboratory experiments or careful idographic work could address these issues better than more statistics.

7 thoughts on “Altitude and Ejectives: contact and population size”