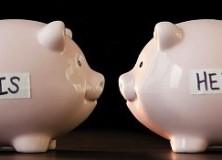 A paper from the Berkeley economic history laboratory published online last week finds a correlation between speaking a language with grammatical gender distinctions and the economic empowerment of women.  Gay, Santacreu-Vasut and Shoham (2013) find that women in countries with languages that make gender distinctions are less likely to participate in the labour market or politics and less able to get credit or own land.

The study uses a series of regressions to demonstrate robust correlations between grammatical gender and various economic variables from a range of databases.  The gender variables include whether a language has a sex-based gender system, how the genders are used in pronouns, the intensity of the gender system (languages with 2 genders vs languages with 1 or more than 2 genders) and whether gender is assigned semantically or formally.  The correlations control for geographical variables (distance from the equator), climate (tropics, frost days, access to the sea), history of colonisation, continent, religion and cultural beliefs and values.  The findings include statistics such as “Having a sex-based gender system decreases the female labor force participation rate by 13 pp % relative to the base-line value in countries with no gender system”.

The approach is very similar to Keith Chen’s study of future tense and economic savings behaviour, and uses some of the same data including the world atlas of language structures (WALS) and the World Values Survey.  Indeed, Gay et al. find that “women living in countries whose dominant language marks gender more intensively are less likely than men to save”.  The paper follows other studies on the cultural transmission of agricultural technology and the role of women in society (Alesina, Guiliano & Nunn, 2011, see here).

Gay et al. argue that this is evidence for a Whorfian effect of language on thought:  distinguishing gender in language leads people to think about genders differently, and therefore for the culture to distinguish opportunities for men and women to a greater extent.

“These findings are relevant to several long-debated questions about the origin of language, its evolution, and its effect on speakers…. We … show that language influences female labor force participation even after we control for current beliefs and values, for historical agricultural practices” 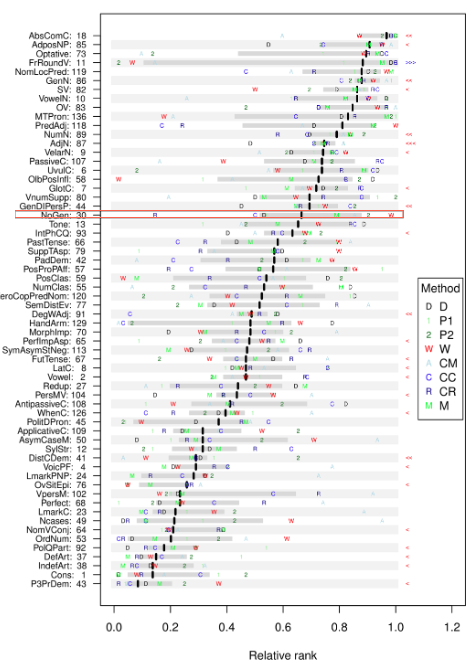 The evolutionary explanation of Gay et al. includes Quiatt’s idea that the division of labor between men hunting and women gathering in early societies was a driving force in the emergence of language.   Together with the stability of gender, the authors recognise an alternative hypothesis that some aspects of culture change slowly, and (presumably) that gender inequality and grammatical gender may just have been co-inherited.  However, this hypothesis isn’t pursued.

The authors claim that they control for historical factors, but this just boils down to the use of the plough since the 17th century and whether the country was part of a colonial empire.  Like in Chen’s paper, there is no attempt to explicit deal with the non-independence of cultures and languages (Galton’s problem, James and I are working with Chen on doing some of these analyses for his hypothesis).  Phylogenetic comparative methods should be used to test this hypothesis (and are relatively easy to carry out with R packages caper and ape).  There seems to be little appreciation of the time-depth of languages in general, from comments like the 17th century being referred to as the ‘distant past’ and a confusing citation of evidence that grammatical gender existed as far back as the 5th century BC.

The authors do cluster the results by language family.  Although there are few details of the results in the paper, they indicate that language family has a strong effect on the results, but that this indicates that “the impact of gender marking intensity on socio-economic outcomes comes both from across and within linguistic family variations in languages grammatical structure”.

Population size might also be another confounding factor that the authors do not consider, since larger populations are more likely to be in contact with other languages, which can cause morphology to simplify (see Lupyan and Dale, 2010 and Hanna’s post on foreigner-directed speech).

I am quite skeptical of this paper.  James and I have written about spurious correlations and problems with correlational studies of cultural phenomena and this paper follows the recent trend of generating hypotheses from simple correlations.  The data and methodology are very similar to Chen’s work and it’s worrying to think that, since these studies are becoming easier to run, and since they’re being presented online before peer-review, erroneous or misleading hypotheses could gain the attention of the public or of policy makers.  Last month, several flaws were uncovered in a widely-cited large-scale cross-cultural economics study, but not before it had been used as testimony before the US senate budget committee in order to support budget cuts.

I can imagine this paper angering many people.  To put it cynically, it’s as if gender inequality is only due to humans being slaves to their language, rather than centuries of active patriarchal societies.  The hypothesis doesn’t seem to have a good reason why distinctions in gender should disfavour women over men.  Perhaps most disturbing is the authors’ clear appeal for these findings to be used in policy:

“The direct and possibly cognitive influence of a language on its speakers and on economic life may have important policy implications. For instance, understanding this connection would facilitate the debate regarding the need to implement quotas or to opt for market forces to drive women economic participation up and thereby increase overall economic prosperity.”

The authors suggest that this can be used to improve access to economic and political power for women, but how do they think the study will contribute to immigration quotas?  Could this argument be used to stop female economic migrants who speak languages with many genders, on the grounds that they are less likely to contribute less to the economy?

Whorfian hypotheses generated from large-scale cross cultural statistics are poorly understood on many levels, and it seems too easy to find ‘evidence’ that fits a particular agenda.  This kind of study is potentially dangerous, but it will no doubt garner media attention anyway.

6 thoughts on “Gender, language and economic power: another spurious correlation?”