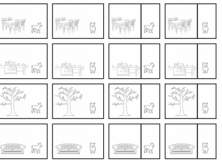 After all of this talk of spurious cross-cultural correlations it might be time to direct the discussion back to ways to resolve an over-reliance on statistical tendencies. Sean and James did a workshop on this at this year’s EvoLang about how constructive, idiographic and experimental approaches also need to be considered when investigating how linguistic and social structure are linked.

With this in mind, I present my poster from EHBEA earlier this year, which explains some experiments I did for my MSc thesis. I was trying to test the hypothesis that more second language speakers in a linguistic population might effect the cultural transmission of that language. This hypothesis is an attempt to explain the large-scale correlations found by Lupyan & Dale (2010) that showed that the the larger a language population the less morphologically complex that language will be. The idea being that larger language populations will have more second language speakers, and will therefore be more susceptible to the learning biases of adult learners.

There is some experimental evidence about the differences between adult and child learners, some of which I look at here, but in this study I looked at the role foreigner directed speech might have on the use of language in a community with a lot of second language speakers.