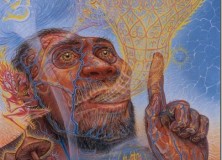 Outside the world of evolutionary linguistics I used to spend some of my time working in a charity shop. Of the many dull moments, much of which spent bickering with overzealous bargain hunters about the arbitrary nature of our pricing, there were a few gems of conversation. On one of these days, I found myself conversing with several people about language change, when one of the customers chimed in with something I hadn’t heard before. He said, quite confidently, that the origin of speech and language lay in our ancestor’s proclivity for getting stoned. I humoured him on the magic mushroom hypothesis of speech origins, until he decided to share his wisdom about the foretold destruction of our society in 2012 (at which point I directed him to our copy of Emerich’s latest disasterpiece). Still, it appears he wasn’t completely barmy, at least on the speech origins front, as there is a Stoned Ape theory of human evolution by one Terence McKenna (from Wikipedia):

The mushroom, according to McKenna, had also given humans their first truly religious experiences (which, as he believed, were the basis for the foundation of all subsequent religions to date). Another factor that McKenna talked about was the mushroom’s potency to promote linguistic thinking. This would have promoted vocalisation, which in turn would have acted in cleansing the brain (based on a scientific theory that vibrations from speaking cause the precipitation of impurities from the brain to the cerebrospinal fluid), which would further mutate the brain. All these factors according to McKenna were the most important factors that promoted evolution towards the Homo sapiens species. After this transformation took place, the species would have begun moving out of Africa to populate the rest of the planet. Later on, this theory by McKenna was given the name “The ‘Stoned Ape’ Theory of Human Evolution”.

I’m fairly sure this just offloads part of the craziness onto McKenna, but I might name drop the theory next time I’m looking for a more lively reaction when discussing language origins.

N.B. This is one of my many posts that was written some time ago. I decided to publish in 2012 just in case the customer was right about our impending doom. With that out of the way, we can now focus on the critical issues surrounding the size of a language’s phoneme inventory and the distribution of Psilocybe cubensis.

4 thoughts on “The Stoned Ape Theory of Speech Origins”