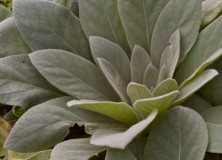 The challenge is simple: for any given text – poem, drama, novel, film, what have you – is it a ring or not? That is, does it have the form:

The question seems fairly straightforward, and, yes, the QUESTION is. But answering it may not be. I speak from experience.

Note that the question is about form, not meaning, and that answering the question requires that you describe the text, not that you figure out what it means. You will, however, have to pay attention to meaning to determine, say, whether or not two elements function in parallel. But comparing the meanings of elements within a text is quite different from translating meanings into some theoretical discourse.

I think we need to know, for any text we wish to study, whether or not it has a ring form. And if not a ring, then what? Why should we know this? Because form is important, it guides our apprehension of the text.

What I REALLY think is that if enough people set out in search of ring forms, by the time, say, that a 100 new ring form texts have been identified, a new mode of literary study will be emerging, one that can be commensurate with the new psychologies, but which is not subordinate to any other discipline or body of knowledge.

The study of ring forms is not new. I first learned about ring forms in a 1976 article in PMLA: R. G. Peterson, Critical Calculations: Measure and Symmetry in Literature (PMLA 91, 3: 367-375). He was reporting on a literature that was two decades old by that time, though it was mostly about classical and biblical texts. Beyond verifying the chiasmus in Dylan Thomas’ “Author’s Prologue”, however, I did nothing with the article. I simply filed the topic away in my mind.

I didn’t begin to think about rings until Mary Douglas brought them to my attention earlier in the decade. She had been kind enough to blurb my book – Beethoven’s Anvil: Music in Mind and Culture – and my editor put me in touch with her after the book came out. She’d been working on the topic for some time and had published books on two Old Testment texts: Leviticus As Literature (Oxford 1999), In the Wilderness: The Doctrine of Defilement in the Book of Numbers (Oxford 2001). She believed that rings are fundamental to human thought.

She traveled to Yale in the fall of 2003 to deliver the Terry Lectures, which she devoted to rings (audio online). Four years later Yale published those lectures in a slim volume: Thinking in Circles: An Essay on Ring Composition, Yale University Press, 2007. As one would expect, she talked about ancient texts – Iliad, the Old Testament – but also Agatha Christie and Tristram Shandy.

I think her argument on Tristram Shandy is a bit of a stretch, but I haven’t read the text in years and there are other things I find more pressing than verifying or refuting her argument about that text, which, obviously, is a very important one. I do however think that it would be possible for the profession to reach agreement on that matter, though doing so might not be as straightforward as those simple schemas at the top of this post would suggest.

You’d have to pay close attention to the text and take extensive notes. And, while you’re at it, why not sort out plot and story (in the Russian formalist sense) for the whole text? List all plot incidents in chronological order and then reconcile that order with their appearance in the text. By the time that had been done and the ring-question answered, we’d know a lot more about that text, that very important text, than we do now.

Sounds like a project for a bright group of graduate students.

Anyhow, Douglas formulate a set of seven features she found diagnostic of rings, as follows (pp. 36-37):

1. Exposition or Prologue: There is generally an introductory section that states the theme an introduces the main characters…

2. Split into two halves: If the end is going to join the beginning the composition will at some point need to make a turn toward the start…

3. Parallel sections: After the mid-turn the next challenge for the composer of a ring is to arrange the two sides in parallel…When the reader finds two pages set in parallel that seem quite disparate, the challenge is to ask what they may have in common, not to surmise that the editor gor muddled.

4. Indicators to mark individual sections: Some method for making the consecutive units of structure is technically necessary…

6. Rings within rings: As Otterbo pointed out, the major ring may be internally structured by little rings…

7. Closure at two levels: By joining up with the beginning, the ending unequivocally signals completion. It is recognizably a fulfillment of the initial promise…The final section signals it arrival at the end by using some conspicuous key words from the exposition…Most importantly, there also has to be thematic correspondence…

I have now done enough work on rings that I can verify that, yes, that’s a good list. But you shouldn’t expect to find every feature in every text.

So, What Is a Ring, Anyhow?

Those simple schemas at the end of the post indicate an idea, well, two variants of an ideal. Real texts are often a bit messy.

Still, I am confident that, for example, Tezuka’s Metropolis is a ring. With a central section in which a BIG SECRET is revealed, it is very strong on central loading (#5), but a bit weak on parallel sections (#3). This central episode splits the text in two (#2). The parallelism lies in the settings in which events occur more than in the events themselves. And those settings serve to indicate the sections (#4). The text has a prologue (#1), which is answered by brief epilogue; the prologue and epilogue together form the outermost ring. And that means that double closure (#7) is satisfied. I didn’t notice any rings within rings (#6), but then I wasn’t looking.

While that piece* isn’t available online, I’ve placed my working table in an appendix to Description 2: The Primacy of the Text (PDF).

Now one might say, but well, Metropolis, that’s a comic book, it’s not serious literature. That will not do, not in the 21st Century. We’re in anthropological mode; we study the culture that’s there, not the culture we happen to like. In any event, that particular “comic book” – it’s not really a comic book in the American sense anyhow, it’s manga ¬– has been very influential in post war Japanese culture. If you want to understand, for example, the Japanese fascination with humanoid robots you would do well to examine that text.

But if you insist on canonical Western texts, I offer Heart of Darkness; you can find the arguments for ring form in this working paper: Heart of Darkness: Qualitative and Quantitative Analysis on Several Scales (PDF). The basic argument is in this post: The Heart of Heart of Darkness (which I dedicated to Mary Douglas). I score the text strong on 1 (prologue, which is answered at the end), 7 (closure), 2 (split in two), and very strong on 5 (central loading). I can’t really see strong parallels front and back (3), nor indicators (4), and there may or may not be rings within rings (6), but that strikes me as being an optional feature anyhow. If it’s there, fine; but if a text scores high on the others, but that’s not there, that’s no big deal.

Which is to say, I’m making judgments about which features are most important. Once enough people start doing this work I think we’re going to have to make many such judgments and we’re going have to develop a typology of ring forms.

In the case of Heart of Darkness, the lack of obvious parallelism conjoined with the very strongly marked central section led me to advance the notion of center point construction. The text is obviously structured around that center point and that must be recognized even if the events before and after do not parallel one another in strict fashion. And, given this notion, it might make more sense to classify Metropolis as center point rather than ring. Rings are simply center point forms with added parallelism.

Now, what’s this strongly marked center point in Heart of Darkness? See that tall link in the middle of the chart? That’s the center point. Each bar in that chart represents the number of words in a single paragraph, with the paragraphs listed in order from left to right. The structural center is also the longest single paragraph in this text; it’s 1500 words long.

But one isn’t likely to notice that from within the thick of the action. There’s something else that marks that paragraph.

The text is in three parts, and we’re a bit over halfway through the second. We’re on the boat traveling up river and the boat is attacked. The helmsman is speared and lies bleeding on the deck. At that point Marlow interrupts the story for a long digression, THAT paragraph. That paragraph is basically a précis of Kurtz’s story and, as such, contains incidents that have not yet happened in the text, not to mention things that happened before the story began. That’s what brought the paragraph to my attention, it is anachronous. Anachrony is also what tipped me to Metropolis. Once the précis concludes Marlow rejoins his chronology, where we find the helmsman still bleeding on the deck.

That paragraph is VERY strongly marked.

And so it goes with the other texts I’ve worked on. Actually, at this point it’s mostly Disney’s Fantasia, where three episodes are rings (Nutcracker, Sorcerer’s Apprentice, and Pastoral Symphony) and I suspect that the film as a whole may quality as well. And then there’s “To a Solitary Disciple.” It’s clearly marked into seven strophes and the central one is strongly marked. It certainly qualifies as center point construction. Whether or not it’s a ring . . .

I’ve tagged all the relevant posts with ring-form.