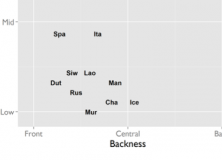 A paper in PLOS ONE this week argues that “Huh?”, as in “What did you say?”, is a universal word with the same form and function in many languages (see here for a brief overview).

When a conversation breaks down, maybe because something wasn’t heard properly, an interlocutor can initiate conversational repair by using a range of strategies.  For instance, by questioning a particular word (“whose car?”) or by using a formal response such as “Pardon?”.  While the forms of these types varies across language, the strategy of signalling complete lack of understanding is accomplished in 30 languages by a word like “huh?”.  The precise phonetic properties of these words in 10 languages are analysed in the paper.  Here’s a video of how they all sound:

The research follows from a large-scale project at the Max Planck Institute for Psycholinguistics that collected conversational data from 10 languages, transcribed them and analysed how turn-taking and repair works in each in a Conversation Analysis framework.

The authors argue that this is a lexical word (which is not innately constrained, like laughter), which has emerged by convergent evolution.  “Huh?” is ideal for initiating repair because it’s a short, question-like word that requires minimal effort to produce and is effective at signalling a problem.  The phonetic analysis shows that the word has adapted to the phonologies of the particular languages (e.g. the vowel being closer to canonical vowels in that language), but the overall similarity of the words is striking.

They don’t rule out the possibility that the word was inherited into languages from an ancestral form, but they  also point out that conversational interaction is one of the primary ecologies for language evolution:

“our study points to a factor that may constrain divergence or diachronic drift: the selective pressures of specific conversational environments, which may cause convergent cultural evolution. The possibility should not be surprising. After all, words evolve in utterances in conversation, so conversational infrastructure is part of the evolutionary landscape for words. We are referring here to the sequential infrastructure that serves as the common vehicle for language use – an infrastructure that may well pre-date more complex forms of language and that seems largely independent of sometimes radical differences between individual languages’ grammars and [lexicons].”

The authors are currently extending this work to see if there are cross-cultural similarities in how the whole system of repair works.

You can read more about the project at ideophone.