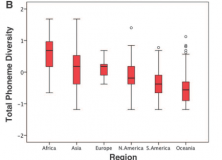 It’s been well over a year since I first wrote about the relationship between phoneme inventory size and demography (see here and here). Since then, I have completed a thesis examining this relationship further, especially in the context of the relative roles of demography and tradeoffs between other linguistic subsystems (namely, a language’s lexicon and its morphological complexity). Outside my own bubble, the topic has exploded in popularity, culminating in the publication of Quentin Atkinson’s paper, Phonemic diversity supports a Serial Founder Effect Model of Language Expansion from Africa. It really hit home how big the topic was when I saw that the New York Times had picked up on the article. For me, this was a double-edged sword: obviously, I saw myself as the phoneme-guy over at Replicated Typo, so having someone else take this niche topic and make it popular dented my ego somewhat, but it was also a positive development in that the idea was now going to get the attention it deserved…

… Well, it sort of did and didn’t. Atkinson raised two major theoretical points in his paper. The first, and the one I’m interested in, made the link between phoneme inventory sizes, mechanisms of cultural transmission and the underlying demographic processes supporting these changes. Sadly, it was Atkinson’s second idea – that we could develop a serial founder effect model from Africa based on the phoneme inventory size – where most of the attention fell. In a methodological sense, I admired Atkinson’s approach to testing this second hypothesis, but I did feel he jumped the gun somewhat: I think more work was needed on the cultural transmission model before testing for serial founder effects. Indeed, that we haven’t developed an initial model linking the relationship between phoneme inventory size and demography, may yet prove to be Atkinson’s downfall: we should be testing multiple explanatory models (Bayesian MCMC comparison, perhaps?) rather than taking a one-size-fits-all approach.

Anyway, my long-winded and whiny intro of lost opportunities aside, the reason for this post is that Linguistic Typology has recently published a series of papers on what were probably the two big headline hitters of last year (at least in evolutionary linguistic circles): the aforementioned Phonemic Diversity paper (see here and here) and Dunn et al’s Word Order Universals paper (see here, here and here). In fact, the latter paper is a perfect example of the point I was trying to make above: they tested multiple, competing hypotheses to explain the same set of data. I’m hoping someone else will pick up on the Word Order commentary (and that includes anyone outside the usual contributors, so here’s my email), because I’m not sure whether I’d do the topic justice. Over the coming weeks, however, I will dedicate several posts to the great vanishing phoneme debate, with each post gradually laying out my theoretical model for linking cultural transmission and socio-demographic forces with the size of a language’s phoneme inventory.

For now, I’ll just provide a brief list of the authors (and their papers) that critique Atkinson’s original article, which, if you know your linguists, pretty much reads like an A-list of the big names in the field (click here for the link to the issue):

I’ll hopefully mention some of these in the coming weeks, but I’ve only got limited access to them (apparently, even institutional access is not enough to bypass the gated walls of this archaic system of distributing knowledge).

4 thoughts on “The Great Mystery of the Vanishing Phonemes”