Here’s a video of a talk I gave at the Santa Fe Institute‘s Complex Systems Summer School (written with roboticist Andrew Tinka-check out him talking about his fleet of floating robots).  The talk was a response to the “Evolution Challenge”:

I also blogged about a part of this talk here (why a mad scientist’s attempt at creating A.I. to make new scientific discoveries was doomed).

The talk was given a prise for best talk by the judging panel which included David Krakauer, Tom Carter and best-selling author Cormac McCarthy.  At several points in the talk, I completely forget what I was supposed to say because the people filming the event asked me to set my screen up in a way so I couldn’t see my notes.

I just heard a talk by social network creator extraordinaire Clio Andris about redefining regional boundaries in the UK based on telecommunications data.  Her group took data from 12 billion telephone calls made over the space of a month and created a social network based on this (Ratti et al. , 2010). This network was then used to calculate how closely connected two neighbouring locations were. By optimising the spectral modularity, the best-fitting boundaries could be defined.

The data is fascinating, but there is little explanation.  Here’s one of the maps (left) compared with a map of regional accents and a map of rail transport links (right): 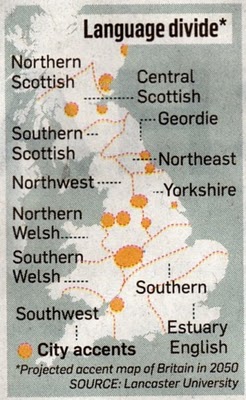 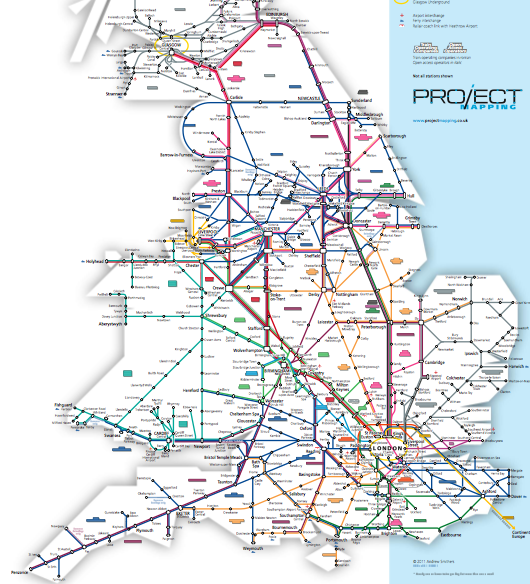 One of the first things that struck me was the similarity with a map of regional accents (apologies for the quality of the accent map – I couldn’t find the one I was looking for).  Apparently, people are talking to people that sound like them.  Or, people who talk to each other sound like each other.  This isn’t covered in the paper, but seems like an important issue.

Secondly, the rail links also seem to form the ‘backbones’ of the communications regions.  This is also mentioned in the paper.  However, these two features are linked.

Coming from Wales, the important fit here is the three-way split in Wales.  South Wales feels like a different country to North Wales – culturally and linguistically.  However, both are linked by having large amounts of natural resources: Coal in South Wales and slate in North Wales.  This lead to massive migration into cities in the north and south, and rail links were set up to extract these resources to London or the nearest ports:  Cardiff in the south and Liverpool in the north.  Thus, it’s still a real pain to get from North Wales to South Wales.  The picture is somewhat true of the east and west sides of the north of England.

So, the natural resources concentrated people and transport links.  However, it also concentrated political views.  The large migrant community in Wales, working for little pay in large mine institutions, became unionised.  Socialism emerged, promoting political movements that lead to the minimum wage.

The point being, natural resources, transport links and politics are connected with some being historically dependent on each other.  This is, perhaps, precisely why splitting the nation by who speaks to who is a good measure of political regions.  It would be fascinating to see how linguistic divisions interact with these variables.

Sorry, this isn’t really Language Evolution related besides Chris Knight’s obvious connection to the subject but thought it would be of interest to readers of the blog.

Last night Chris Knight and Camilla Power were arrested after planning to execute effigies of Prince William at Westminster Abbey. They were arrested ahead of the royal wedding today.

A professor of anthropology at the University of East London, Chris Knight along with his partner, Camilla Power, also a anthropology lecturer at UEL, were arrested outside their home in southeast London at around 6.15pm.

They were arrested on suspicion of conspiracy to cause public nuisance and breach of the peace.

Dr Knight was seen laid down on the pavement during the arrest in an attempt to stop officers moving him into a police van. But the police prevailed and they were held in a police station overnight.

This is not the first time Dr Knight has caused trouble. He was sacked from his position in 2009, following claims that he incited violence at the G20 protests.

THE add that the camera man who was at the scene of the arrest asked Dr Knight: “Can I get your house keys so I can feed the rabbit?”

I do hope that the rabbit is OK.