Just before Christmas I found myself in the pub speaking to Sean about his work on bilingualism, major transitions and the contrast between language change and the cultural evolution of language. Now, other than revealing that our social time is spent discussing our university work, the conversation brought up a distinction not often made: whilst language change is part of language evolution, the latter is also what we consider to be a major transition. As you evolutionary biologists will know, this concept is perhaps best examined and almost certainly popularised in Maynard Smith & Szathmáry’s (1995) The Major Transitions in Evolution. Here, the authors are not promoting the fallacy of guided evolution, where the inevitable consequence is increased and universal complexity. Their thesis is more subtle: that some lineages become more complex over time, with this increase being attributable to the way in which genetic information is transmitted between generations. In particular, they note eight transitions in the evolution of life: 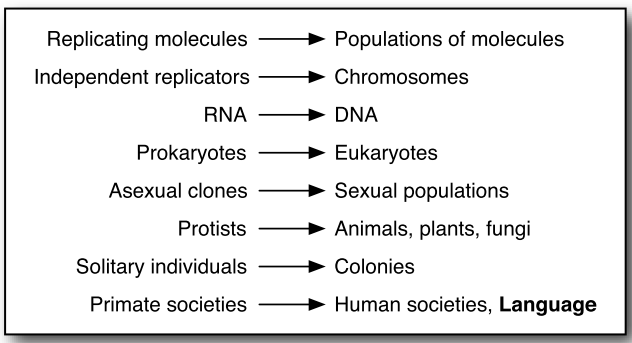 What’s notable about these transitions, and why they aren’t necessarily an arbitrary list, is that all of them share some broad commonalities, namely: