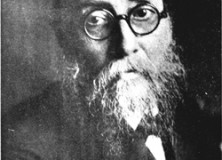 A century ago Antoine Meillet, in his work L’évolution des Formes Grammaticales, coined the term grammaticalization to describe the process through which linguistic forms evolve from a lexical to a grammatical status. Even though knowledge of this process is found in earlier works by French and British philosophers (e.g. Condillac, 1746; Tooke, 1857), as well as in the publications of a long list of nineteenth-century linguists beginning with Franz Bopp (1816) (cf. Heine, 2003), it was Meillet’s term that would come to characterise what is now a whole field of study in historical language change. At a first glance, the concept of grammaticalization might seem fairly straightforward, yet in the proceeding hundred years it has undergone numerous revisions and developments, with many of these issues being brought to the fore at a conference I recently attended in Berlin (yes, there are other conferences we’re interested in than Evolang).

One of the stated aims of the conference was to refine the notion of grammaticalization (click here for the website). I’m not 100% sure this was achieved and, following an excellent talk by Graeme Trousdale, I was even less sure of whether we should keep using the term. We’ll come back to this is in a moment. For now, many linguists will probably agree that one of the most prominent developments is found in the expansion of Meillet’s definition by Kuryłowicz (1965): “[…] grammaticalization is that subset of linguistic changes whereby lexical material in highly constrained pragmatic and morphosyntactic contexts becomes grammatical, and grammatical material becomes more grammatical […]” (Traugott, 1996: 183 [my emphasis]). Under this new definition, grammaticalization takes into account the gradual nature of diachronic change in language, with there being a continuum of various degrees of grammatical status (Winter-Froemel, 2012).

A widely used example of grammaticalization is the development of the periphrastic future be going to. In the time of Shakespeare’s English, be going to had its literal meaning of a subject travelling to a location in order to do something, with the subject position only allowing for a noun phrase denoting “an animate, mobile entity, and the verb following the phrase would have to be a dynamic verb” (Bybee, 2003: 605). Indeed, there were several movement verbs that we could substitute based on the following constructional schema:

I am travelling to see the king

I am riding to see the king

However, of the above examples, it was only the construction with go in it that underwent grammaticalization so that the motion verb (go) and the purpose clause (to + infinitive) came to express intentionality and future possibility. Of course, these changes did not happen abruptly, but rather they gradually evolved over time, with one prediction being that there was stage of ambiguity where both meanings coexisted (see Hopper’s concept of layering). We might conceive of this as hidden variation due to the inferential capacities entailed in the transmission from speakers to hearers. At some point the use of be going to was used in a construction that has an unambiguous meaning (e.g., I’m going to stay at home; The tree is going to lose its leaves etc), which led to an unmasking of this hidden variation within the speech community. This unmasking further opens up the possibility for these two meanings to become structurally untangled; demonstrated in contracted form of be plus the reduced gonna [gʌnə]. Below is a diagrammatic representation of these changes:

Modified from a diagram provided by Hoefler (2009)

Problems arise when we consider what is meant by grammatical. This will vary depending on the linguist you are talking to. Take, for example, the development of discourse particles. Some authors might characterise this as an instance of grammaticalization, whereas others are inclined to argue that, despite the surface similarities of the underlying processes, the movement toward syntax and morphology is fundamentally different to these movements toward discourse. Indeed, one of the major themes of the conference was determining the difference between grammaticalization and other –izations (e.g. lexicalization, pragmaticalization, degrammaticalization etc). Quite a few talks approached this subject to varying degrees and from various theoretical frameworks. Some tackled these by directly comparing the various definitions of these processes, as highlighted by Kristin Davidse (Distinguishing grammaticalization from lexicalization), Esme Winter-Froemel (Grammaticalization, (inter-)subjectification, and pragmaticalization: modelling changes in communication) and Muriel Norde and Karin Beijering (Facing interfaces – a clustering approach). There were also those talks, like Brian Joseph’s, where the emphasis was on trying to quantify grammaticalization. For Joseph, he adopted Haspelmath’s (2004) definition of grammaticalization that results in “the tightening of internal dependencies, and thus a weakening of boundaries [between elements]”.

In my next post I’ll offer a more thorough definition of construction grammar, inheritance networks and how we can offer a novel approach to some of the issues in grammaticalization by considering the concept of degeneracy (which I previously discussed here and here). For now, if you want to read more, then all of the abstracts are available on the website. There was also talk of there being a special issue at some point in the near future, but I’ll have to get back to you on that one.

N.B. Bonus point for guessing who the guy is in the featured image.