Having had several months off, I thought I’d kick things off by looking at a topic that’s garnered considerable interest in evolutionary theory, known as degeneracy. As a concept, degeneracy is a well known characteristic of biological systems, and is found in the genetic code (many different nucleotide sequences encode a polypeptide) and immune responses (populations of antibodies and other antigen-recognition molecules can take on multiple functions) among many others (cf. Edelman & Gally, 2001). More recently, degeneracy is appreciated as having applications in a wider range of phenomena, with Paul Mason (2010) offering the following value-free, scientific definition:

Degeneracy is observed in a system if there are components that are structurally different (nonisomorphic) and functionally similar (isofunctional) with respect to context.

A pressing concern in evolutionary research is how increasingly complex forms “are able to evolve without sacrificing robustness or the propensity for future beneficial adaptations” (Whitcare & Bender, 2010). One common solution is to refer to redundancy: duplicate elements that have a structure-to-function ratio of one-to-one (Mason, 2010). Nature does redundancy well, and is exemplified by the human body: we have two eyes, two lungs, two kidneys, and so on. Still, even with redundant components, selection in biological systems would result in a situation where competitive elimination leads to the eventual extinction of redundant variants (ibid).

Unlike redundant components, degenerate forms are capable of taking on the same function as well as having multiple functions under diverse conditions (pluripotent). It explains why biological organisms are able to maintain variation without loss of function. In addition, the pluripotential of these forms provide a  source of structures, or bricolage, that may later be used to solve evolutionary problems. This is supported by recent work of Whitcare & Bender (2010), which places degeneracy as a pre-condition for open-ended evolution, through facilitating the coexistence of “high robustness, growing complexity, and the continued propensity for innovation” (see the diagram from the same paper below). By incorporating degeneracy as a concept we have, to paraphrase Mason (2010), a potent analytical tool to bring together ideas in evolutionary theory, particularly when trying to understand amplification, variation and transmission. 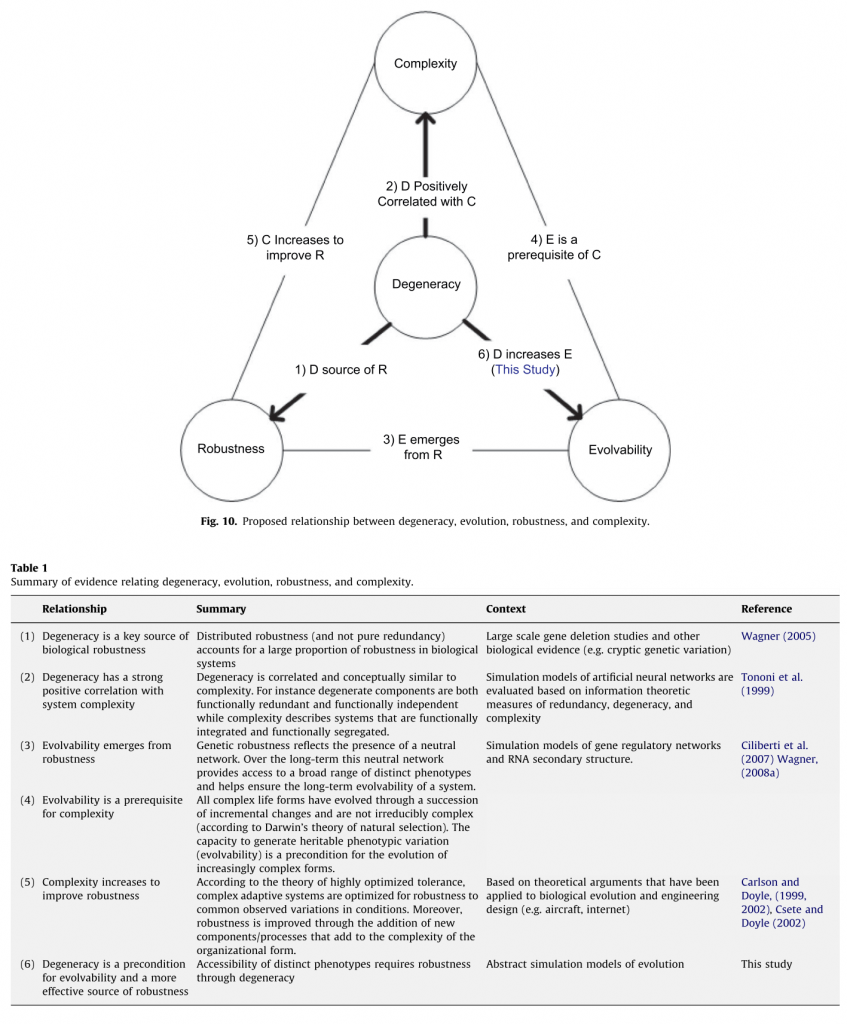 Like in biological systems, redundancy is also a common characteristic of language. Repetition of words, for instance, is often found in spoken speech, especially when transitioning from one sentence to another. Meanwhile, the intentional use of repetition is an oft-used rhetorical device, as Tony Blair exhibited in his now much vaunted phrase: education, education, education (cf. epizeuxis). Less appreciated is the role of degeneracy. Polysemy (signs that have a large semantic field) and metaphor are two examples where similar, but not necessarily the same structures can convey identical, as well as different, meanings depending on context (Eldeman & Gally, 2001; Traugott & Dasher, 2002). Another avenue is found in sound systems. In particular, degeneracy might be useful in providing cultural evolutionary explanations for the typological patterns observed in the size of a language’s segment inventory (see here).

Segments as being built of degenerate phonetic tokens

Normally, an individual segment, or phoneme, is defined in terms of its contrastive function in lexical meaning. Still, despite having a well-understood function, this definition does not really explain what a phoneme is. Silverman (2010) offers a succinct definition, placing the segment as a discrete psychological category which emerges from variable speech tokens. That is, an individual segment will be underpinned by multiple phonetic tokens, or exemplars, within an idiolect (cf. Pierrehumbert, 2003). But this is not all. Segments are not only variable at the individual level, they are also an emergent property of their speech community, having come into existence through repeated interactions between individuals, allowing for coordination and unconscious negotiation to enable numerous speech tokens to represent a particular segment (Port, 2010).

Enlisting the concept of degeneracy is useful for several reasons. First, it necessitates a distinction between the concept of a segment – that is, its contrastive role in lexical meaning – and its underlying structural elements (the phonetic speech tokens). Furthering on this distinction is the second point: in being distributed at the idiolect and communal language, segment categories are robust. Here, the removal, insertion or modification of a component is not detrimental to a system. As such, substituting one sound for another does not always result in a change of function, nor is one sound necessarily restricted to serving one function. Indeed, the growth of phonetic variation in phoneme categories is, to a certain extent, beneficial because it provides robustness through not easily being “deleted from a system because the function is distributed among a population of dissimilar structures” (Mason, 2010).

Importantly, in viewing segments as being built up of degenerate phonetic tokens, we can link sound change with three important concepts in Complex Adaptive Systems: robustness, complexity and evolvability (Whitcare & Bender, 2010). As already mentioned, segments are robust due to their distributed nature at the idiolect and the speech community, however, this robustness also introduces a degree of complexity because phonetic tokens are not restricted to one function, and, due to the inherent variability within the system, they can evolve through differential amplification of forms. Sound change therefore requires variable, degenerate segments in order to maintain a reasonable degree of stability, whilst also offering numerous avenues for new sounds to develop. Indeed, even though much of the discussion has focused on contrastive sounds, we see in the complementary distribution of allophones a situation where different speech sound can take on similar functions, but also differing in their contextual deployment. Based on these observations, we can imagine at least three distinct linguistic functions for sound substitutions: contrastive (meaning-changing), allophonic (meaning-preserving) and neutralising (homophone-inducing alternations) (Silverman, 2010, see below).

Of course, we still need mechanisms of amplification, such as drift, selection and blending, and the underlying conditions of the speaker community, before evolutionary principles provide explanatory underpinnings for synchronic typological patterns. Discussing such points is beyond the remit of this post, yet just as evolutionary theory need not be confined to describing change in biological systems, so too can degeneracy have applications far beyond its current scope. I think language is clearly one area where, even though previous research has made similar links, employing degeneracy is not merely an exercise in terminological re-branding, but rather a tool to help bring together disparate areas of research under one rubric as well as offering new insights into already well-understood processes.

For more information, and some useful background papers, it would be well worth your time to visit the following blog by James Whitcare: http://degeneracy.wordpress.com/

7 thoughts on “Degeneracy, Evolution and Language”