I’ve just finished reading The Player of Games by Iain M. Banks.  Yes, I’m a little behind the times for a geek.  Anyway, I was struck by the concept of Azad in the book.  The protagonist visits an Imperial civilisation whose whole society revolves around the playing of a board game called Azad.  Except this is a vastly complicated board game, played on multiple, football-field-sized boards with semi-conscious pieces and developed over thousands of years.  In fact, the game is so complicated that you can’t play it well unless your cognitive structures have been shaped by the game from a very young age.  Here’s a little extract:

‘The game is used as an absolutely integral part of the power-system of the empire.  Put in the crudest possible terms, whoever wins the game becomes emperor … The game is also used as an exam for both entry into and promotion within the empire’s … establishments.’

‘The idea is, you see, that Azad is so complex, so subtle. so flexible and so demanding that it is as precise and comprehensive a model of life as it is possible to construct.  Whoever succeeds at the game succeeds in life.’

‘It doesn’t have to be totally true,’ the drone said, ‘but cause and effect are not perfectly polarised here; the set-up assumes that the game and life are the same thing, and such is the pervasive nature of the idea of the game within the society that  just by believing that, they make it so.’
[p. 76-77]

It struck me that this might be a good way to think about language.  It’s a flexible, complex system that reflects reality, and which both shapes and is shaped by the society in which it’s used.  I guess you could also think about the developmental stress hypothesis (see Anne’s post) in this way, although Azad is a far more overt and enforced measure of fitness than language or fluctuating asymmetry.

Not that this idea is new – Banks mentions that the langauge of the empire is deeply interlocked with the game, and Banks came up with this idea in 1979!  Why is it that art so often seems ahead of science (I’ve already submitted a piece of work inspired by Banks’ prequel, Consider Phlebas)?  It’s only a metaphor, but if it helps get you out of the mindset of language as primarily an innately endowed behaviour, then it might be a good thing.

Oddly enough, this concept has already been commercialised.  Right-Wrong: The joys of syntax and lex is essentially snakes and ladders with grammaticality judgements instead of a dice.  “Each player attempts to answer ‘right’ or ‘wrong’ when read a sentence from one of 500 question cards.  E.g. She added LOVAGE to the stew on the stove.”  The example turns out to be correct, since lovage is a herb, not a badly inflected euphemism.  Seems a bit prescriptivist. 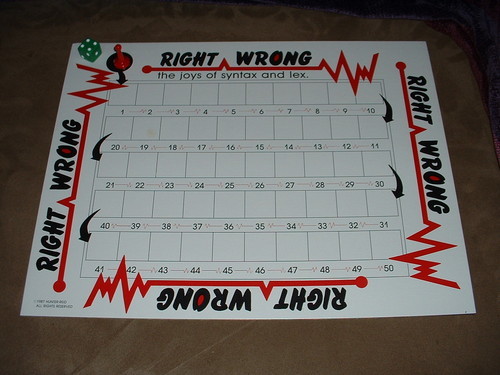 More Bizzarely, Making Sense with Syntax: The board game sounds like a game about building trees where players move and merge constituent pawns and get points for recursion.  It turns out that it’s actually about Dinosaurs: 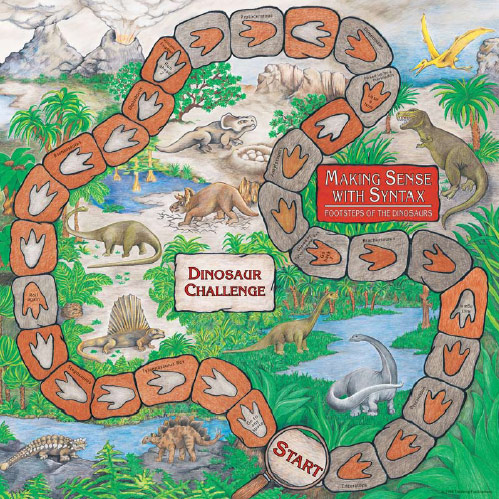 “Don’t you think your students would like to help a paleontologist recreate the “age of the dinosaur” while improving syntax and word-use skills? Everyone gets to return the dinosaurs to their natural environment, while practising Plural Nouns, Word Order, Third person Present tense ….”

Yes, that has always been my dream.  I can’t help the feeling that this is some kind of right-wing fundamentalist propaganda.  Grammar learning: The natural environment of the dinosaurs.

1 thought on “Language as a board game”