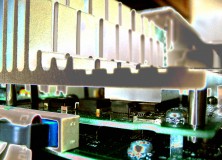 I’ve already written one post in which I express skepticism about information-talk: Culture Memes Information WTF! I fear, alas, that it’s time for another. It’s not that I’m not aware of the concept of information, or that I haven’t made use of the concept, both the Shannon-Weaver technical concept and the more informal concept. But I think information talk is tricky.

As I said in that earlier post, a signal can be said to contain information only with respect to a system that can read and write that information. It’s one thing to talk about information when you have some technical understanding of the read-write mechanism, which seems to be the case in biology. But where such understanding is weak and vaporous, as it is in the case of human culture (the brain is more of a mystery than not) information talk is dangerous. Discussions of cultural evolution over the past quarter of a century or so have, for the most part, been blissfully uninformed by the cognitive and neurosciences and so, I fear, information talk has been a device for avoiding problems rather than solving them.

I get the sense that such talk is based on an underlying notion of pushing bits through a tube—cognitive linguists talk about the conduit metaphor. The nature of the tube doesn’t matter; its size, shape, substance, are all irrelevant. All that matters is the bits.

Language, for example, doesn’t work like that. All that goes through the tube is a physical signal—a sound wave, a visual signal (written or inscribed marks in the case of writing, gestures in the case of sign language), or a tactile signal (e.g. Braille). The meaning doesn’t go through the tube. The speaker’s intended meaning stays inside the speaker’s head. The listener constructs his or her own meaning according to his or her own perceptual and conceptual resources. In many cases these two meanings are congruent, especially in routine and relatively simple matters. There are, however, many cases where the two meanings ARE NOT congruent. In those cases congruence may be achieved through back-and-forth conversational negotiation. But not always, negotiations may fail.

The same, or course, is true of written communication. In that case the negotiations may span continents and decades or more—as is the case, for example, of negotiating terms of discussion appropriate for cultural evolution.

Let me offer a rather heavy-handed analogy (which is reworked from Three Evolutionary Pieces, p. 42). A speaker places meaning into a sound stream like placing candies in a tin floating in a stream. The fishes the tin out of the water the reader eats the candies, one delicious bonbon after another. The listener eats the candies supplied by the speaker. Yum!

But, as I’ve said, language is not like that. We have known that at least since the early 20th century when Saussure made it clear that the relationship between the sound (or image) of word and its meaning was arbitrary. Of course, society goes to great lengths to inculcate consistent linguistic practice among its members; it is not as though listeners get to construe the speaker’s meaning in an arbitrary fashion. Still, as we all know, misunderstanding is common. The reason is the meaning doesn’t go through the tube; all that goes through the tube is a signal that’s associated with meaning.

Let’s get back to that candy floating down river in a tin. Instead of candy, the sender places names of candies into the tin. The recipient who fishes the names out of the tin then goes and procures the candies that were named. But the candies he or she procures may or not be like the one’s the sender had in mind. And that’s very different from the first version, where the candies themselves go into the tin.

Well, in that analogy, it’s the candy itself that’s the real deal. Not the candy wrapper, and certainly not the mere name of the candy. The candy itself is playing the role that “information” plays in most information talk. And where the information talk is about language, it’s not meaning that’s embodied in the speech stream (or the written text), but only pointers to (names) or meaningful ideotypes (to use the terminology I introduced in my previous recent post). The speaker’s pointers point into the speaker’s mind and the listener’s pointers point into the listener’s mind.

7 thoughts on “Information WTF 2: The Candy Itself”