Most of us should know by now that language changes. It’s why the 14th Century prose of Geoffrey Chaucer is nearly impenetrable to modern day speakers of English. It is also why Benjamin Franklin’s phonetically transcribed pronunciation of the English word natural sounded like natyural (phonetically [nætjuɹəl]) rather than our modern variant with a ch sound (phonetically [nætʃəɹəl]). However, it is often taken for granted on this blog that language change can be understood as an evolutionary process. Many people might not see the utility of such thinking outside the realm of biology. That is, evolutionary theory is strictly the preserve of describing biological change, and is less useful as a generalisable concept. A relatively recent group of papers, however, have taken the conceptual machinery of evolutionary theory (see Hull, 2001) and applied it to language.

Broadly speaking, these utterance selection models highlight that language change occurs across two steps, each corresponding to an evolutionary process: (1) the production of an utterance, and (2) the propagation of linguistic variants within a speech community. The first of these, the production of an utterance, takes place across an extremely short timescale: we will replicate particular sounds, words, and constructions millions of times across our production lifetime. It is as this step where variation is generated: phonetic variation, for instance, is not only generated through different speakers having different phonetic values for a single phoneme — the same speaker will produce different phonetic values for a single phoneme based on the context. Through variation comes the possibility of selection within a speech community. This leads us to our second timescale, which sees the selection and propagation of these variants — a process that may “take many generations of the replication of the word, which may–or may not–extend beyond the lifetime of an individual speaker.” (Croft, in press).

To kick things off, I’ll begin with the classical selection process of replicator selection. Here, variant replicators differ in fitness, with a likelihood value being associated with each replicator. Differences in fitness will therefore result in differential replication, which, in the case of linguistics, broadly corresponds to different variants being tagged with different social values. These social values, such as prestige, will determine why some variants are propagated at the expense of others. Still, there are instances where social valuation and selection does not determine the frequency of a particular variant. This leads us to another form of replication that most of you will be familiar with: neutral evolution. In biology, neutral evolution corresponds to genetic drift, where there is no replicator selection; instead, stochastic fluctuations will influence allele frequencies, with population size and mating patterns being influential in determining the outcomes. As an abstract model, genetic drift is very different from what sociolinguistics refer to as linguistic drift, so in order to avoid confusion, it is preferable to use the term neutral evolution. How does neutral evolution correspond to language change? Well, as Blythe & Croft (2009) explain: 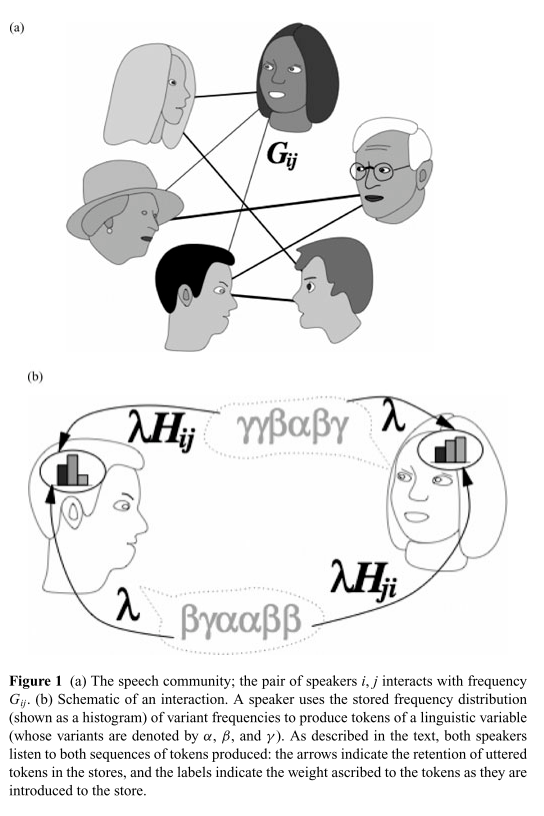 Because the interaction results in the replication of some linguistic variants (replicators) over others in language use by virtue of the frequency of interactions between speakers, it can bring about differential replication.

Here, the only factor influencing replication is the relative frequencies with which interaction takes places between interactors. Of course, it is not simply the case that we approach all speakers as being equal. Be it consciously, or unconsciously, we do assign judgement values on the people we’re communicating with. As such, the likelihood that a linguistic variant is propagated depends on how highly valued the speaker is to a particular hearer. And it is through this process we get weighted interactor selection. Therefore, the linguistic variants of one speaker may be differentially replicated over speakers with less heavily weighted productions. What both forms of interactor selection highlight is the relationship between the speaker/hearer and the linguistic variant: that is, the likelihood with which a variant is propagated depends not only on the frequency of interactions, but also on the differential social valuation of the speakers.

We’re still in the early stages, so assessing the plausibility of these models by comparing them with quantitative data is still limited to only a few case studies. Still, there are a few instances we can draw upon, one of which being Baxter et al.‘s (2009) recent evaluation of Trudgill’s (2004) claim: that new-dialect formation in isolated speech communities, such as the emergence of New Zealand English in the late nineteenth century, are products of drift and neutral interactor selection. What Baxter and his colleagues found, on the basis of a statistical mechanical model, was that these two mechanisms are, by themselves, insufficient to explain the rapid pace of convergence in the population. The next step, then, is to utilise this incremental approach, by gradually testing each form of selection, and seeing what selection dynamics correspond to real world examples of language change.

I’ve submitted this post to the NESCent competition to get a travel award for the ScienceOnline2011 contest.

9 thoughts on “From Natyural to Nacheruhl: Utterance Selection and Language Change”