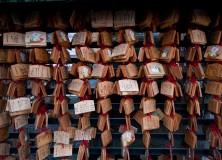 This is written at 1am after a sake and sushi reception.  I have to praise the organisation of the conference so far!

Kicking off the workshop on Constructive approaches to Language Evolution (proceedings for all workshops downloadable here), Bart de Boer talked about the dangers of Fact-free science.  Maynard-Smith recognised of a certain kind of science that does not refer to outside phenomena, but merely concentrates on exploring models already established in the sub-field.  Constructive approaches and the Artificial Life approach was always susceptible to this criticism, but de Boer recognises that the initial enthusiasm for constructive models has waned while the skepticism has remained.   However, de Boer suggested that Maynard-Smith’s point should be a friendly warning to researchers in language evolution, rather than a criticism, since Maynard-Smith himself was subject to these kinds of criticism in the field of mathematical modelling.  de Boer emphasises that research should never loose sight of the research questions that motivated previous studies, and encouraged modellers to ask whether they were answering questions that other researchers were asking.

de Boer also talked about ‘Cargo cult science’ – a name derived from pre-industrial cults that believed in emulating the technologically advanced societies that they came in contact with would maintain the flow of new goods – a practice that goes through the motions of doing science, but doesn’t actually produce results.  For instance, a model shouldn’t just explain the data which it was built on, but should be expandable to explain other phenomena.

de Boer questioned whether the Iterated Learning Model experimental paradigms were guilty of this kind of cottage-industry science, wondering whether they study langauge evolution or how humans play certain types of games.  However, he did concede that it was a relatively new paradigm and at least it got modellers running experiments.  I asked whether this was a little unfair on the ILM, since part of the motivation of the ILM studies was to counter claims made in that pinnacle of fact-free science, formalist nativism.  That is, the ILM showed that you don’t need strong innate biases to get strong language universals in populations.  de Boer answered, quite sensibly, that these points had been made with the computation models already, but more importantly, there was no point in trying to convince those kinds of researchers – the real audience for researchers of cultural evolution should be biologists – de Boer pointed out that the most prestigious work on language evolution (in terms of journal prestige and citations) is largely by biologists, not linguists (e.g Nowak).  And to convince them, we need fact-free science.

It was a pity, then that some interesting modelling work by Reiji Suzuki and Takaya Arita (Reconsidering language evolution from coevolution of learning and niche construction using a concept of dynamic ﬁtness landscape, also in the workshop proceedings) seemed to be suffering from this malady.  To start with, as Thom Scott-Phillips pointed out, the title doesn’t make sense, since niche-construction is essentially a type of coevolution.  Suzuki described model where individuals could affect each other’s linguistic inventories either directly through communication, or indirectly by contributing linguistic elements to a pool of linguistic resources, like an animal altering its adaptive landscape (e.g. beavers building dams).  Each individual had a phenotype space which was defined by several innate properties:  First, an initial phenotype.  Second, a learning variable where by an individual could bring its phenotype closer to the peak of the adaptive landscape.  Finally, a niche construction parameter by which individuals could pull the adaptive peak closer to or further away from their phenotype. Individuals inherited these parameters like genes.

A circular dynamic emerged where the population cycled through having many adaptive peaks, which increased the learning parameter, which lead to a single adaptive peak, which lowered the importance of learning, which finally pulled the single adaptive peak into many adaptive peaks, which increased the importance of learning, and so on.  While this was happening, the fitness of the agents was being ratcheted up by a series of steep increases, essentially a the Baldwin effect being repeatedly applied.  This is the first of a number of presentations about the Baldwin effect and coevolution (talk by Bill Thompson and poster by Vanessa Ferdinand).

While this is an interesting dynamic, when I asked how the concept of a shared environment or the ability to modify the adaptive landscape applied to language, there was not a clear answer.  I suspect that the distinction between individual interactions and modifying the external environment, which works well for animals building nests or dams, does not work so well for spoken language, because linguistic signals don’t persist in the environment.  However, the problem of how to represent the langauge of a community alongside individual behaviour is not an easy problem to solve.  Suzuki suggested that perhaps the model can be related to an earlier stage of language evolution, but we’ll have to wait for a better description of how this model can answer the questions that researchers in language evolution ask.