Evolang is busy this year – 4 parallel sessions and over 50 posters. We’ll be posting a series of previews to help you decide what to go and see. If you’d like to post a preview of your work, get in touch and we’ll give you a guest slot.

Perspective-taking and -setting in language, cognition and interaction is crucial to the creation of meaning and to how people share knowledge and experiences. As I’ve already written about on this blog (e.g. here, here, here), it probably also played an important part in the story of how human language and cognition came to be. In my poster presentation I argue that a particular school of linguistic thought, Cognitive Linguistics (e.g. Croft & Cruse 2004; Evans & Green 2006; Geeraerts & Cuyckens 2007; Ungerer & Schmid 2006), has quite a lot to say about the structure and cognitive foundations of perspective-taking and -setting in language.

Therefore an interdisciplinary dialogue between Cognitive Linguistics and research on the evolution of language might prove highly profitable. To illustrate this point, I offer an example of one potential candidate for such an interdisciplinary dialogue, so-called Blending Theory (e.g. Fauconnier & Turner 2002), which, I argue,  can serve as a useful model for the kind of representational apparatus that needed to evolve in the human lineage to support linguistic interaction. In this post I will not say much about Blending Theory (go see my poster for that 😉 or browse here ), but I want to  elaborate a bit on Cognitive Linguistics and why it is a promising school of thought for language evolution research, something which I also elaborate on in my proceedings paper.

So what is Cognitive Linguistics?

“the study of language in a way that is compatible with what is known about the human mind, treating language as reflecting and revealing the mind.”

Cognitive Linguistics sees language as tightly integrated with human cognition. What is more, a core assumption of Cognitive Linguistics is that principles inherent in language can be seen as instantiations of more general principles of human cognition. This means that language is seen as drawing on mechanisms and principles that are not language-specific but general to cognition, like conceptualisation, categorization, entrenchment, routinization, and so forth. 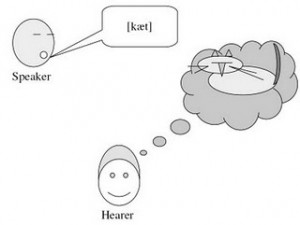 “Language is only the tip of a spectacular cognitive  iceberg,  and  when  we  engage  in  any  language  activity,  we  draw unconsciously  on  vast  cognitive  and  cultural  resources,  call  up  innumerable models  and  frames,  set  up  multiple  connections,  coordinate  large  arrays  of information, and engage in creative mappings, transfers, and elaborations.”

Now what is especially important about linguistic interaction are the following properties of language: Linguistic utterances

Construal operations refer to the specific ways in which a language can portray events and states of affairs from certain perspectives. They include things like expressing different viewing frames on a situation (e.g. “The train goes from Norwich to Peterborough” static and focusing on the whole journey vs. “The train is going from Norwich to Peterborough” dynamic, and only focussing on part of the journey vs. “); construing things at different levels of granularity (animals vs. mammal vs dog vs pug vs black pug vs Rico), spatial perspective (“e.g. “We are going to your party” with the speaker being the ‘deictic centre’ vs. “I’m coming to your party” with the hearer being the “deictic centre” towards who the movement is directed); degrees of involvement or subjectivity/objectivity in a situation (e.g. “the team are really looking forward to the derby” vs. “me and my mates are really looking forward to the derby”) words to denote different aspects of a situation (e.g.: ‘cost,’ ‘charge,’ ‘spend,’ ‘pay,’ ‘sell,’, ‘buy’ for a commercial transaction), and so forth (cf. Radden & Dirven 2007).

And it is this perspectival nature of language that might be most relevant from an evolutionary point of view:

How and when did the capacity (or set of capacities) evolve that allowed us to communicate and share our perspective on things and co-construct a joint perspective on topics?

From a CL point of view, two things are important here: the specific of construal operations of any invididual language certainly have evolved through cultural transmission (cf. Heine & Kuteva 2007; Christiansen & Chater 2008; Kirby 2012, see also here).  But  all construal operations are thought to be instantiations of and to rely on general cognitive capacities. These basic cognitive abilities include, for example, assigning prominence to certain foregrounded aspects of a conceptualization while backgrounding others, developing a shared point of view and taking different perspectives on the same topic.

While some Cognitive Linguists think the story ends here, I share the view that we need empirical and psychological work as well as evolutionary considerations to spell out in more detail what these grounding cognitive capacities look like, how they work and how they support language (cf. e.g. Gonzáles-Márquzez et al. 2007). Because from the perspective of Cognitive Linguistics, these are some of the most important questions that need to be addressed in tackling the evolution of language and cognition.