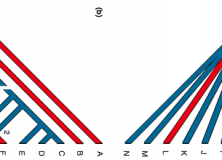 Levinson & Gray (2012) demonstrate how tools from evolutionary biology can help refine the way we look at human language and human cognition.  Phylogenetic techniques allow researchers to properly control for the fact that languages are related by descent.  More importantly, these tools allow the study of the full variation of linguistic structures, rather than assuming that the majority of linguistic structure is constrained by a limited set of Universal Grammar parameters.  This topic has been discussed before, by the authors and on this blog, but this paper is much more a manifesto for change.

Using phylogenetic techniques can lead to different conclusions: For example, Greenberg found that certain orders of particular types of word correlate with others.   However, this study assumed that languages are independent.  Dunn et al. (2011) used Bayesian phologenetic techniques to show that, although there are correlations, they are not consistent across language families (blogged about here).  This hi-lights the power of cultural evolution in bringing about the patterns that we observe today (although it’s not the only way to approach this problem, as Luke Maurits demonstrates).

Levinson & Gray go on to discuss some other studies of the links between langauge structure and social structure.  Atkinson’s (2011) paper on a serial founder effect is criticised (although not as tough as some other  responses), but the authors suggest that

“Regardless of the outcome of this debate, Atkinson’s application of evolutionary thinking is likely to stimulate many more efforts to explain global patterns of linguistic diversity by drawing on the parallels between the processes of biological and linguistic diversification.”

I tend to agree, and me and James Winters are giving a talk at the EvoLang workshop on Constructive Approaches to language evolution (you can read the paper in the online proceedings) trying to defend the large-scale statistical approach which, although has weak explanatory power, can be used to motivate hypotheses which other approaches can test.

Next, they discuss a series of puzzles regarding the connection between language and other aspects of social structure.  For instance, why are the so many languages? Also, they mention the process of ‘schismogenesis’ (Bateson, 1935),  whereby human groups often exaggerate cultural differences in order to make ethnic barriers.  They mention Atkinson et al. (2008) who use phylogenetic methods to demonstrate that language evolves in punctuational bursts.  Levinson & Gray claim that this quantifies the impact of ‘schismogenesis’, although the concept is not mentioned in Atkinson et al. (2008).  A much better demonstration of this process can be found in Gareth Robert’s experimental work on the emergence of linguistic variation.  In a paper that’s trying to bring new approaches to the field, it’s disappointing that the potential role of experimental work is not emphasised (although the canonical Kirby, Cornish & Smith 2008 paper does get a mention).

Their next puzzle involves the co-evolution of different levels of linguistic structure and social structure.  They note that the links between these are not straightforward:  Even the level of technological complexity seems to be an important factor.  They also note the curious findings that a population increase tends to be linked with more simple morphology but a larger phoneme inventory.  We’ll discuss this point in our talk, but James Winters has already got the ball rolling on this theory.

The final section of the paper outlines the reasons to keep the historical perspective in mind, and encourages everyone who’s interested in language and cognition to think in terms of centuries rather than decades.

This is a paper that needed to be written:  There has been a burst of studies recently that draw causal conclusions from statistical correlations without controlling for common descent.  Indeed, it’s possible to find evidence for almost any hypothesis without careful measures (see also a poster by me and James).  The only barrier seems to be technical, and that side is becoming easier with open-source tools such as Mr. Bayes.  That’s not to say that there aren’t reasons to be skeptical about applying phylogenetic techniques to language, as Kevin’s post discusses.

The paper prompts more questions than it answers, but this might not be a bad thing.  Why not have variation in our approaches and hypotheses, as well as recognising the variation in the phenomena we study?