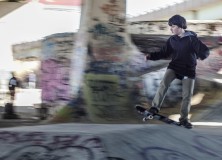 Once again, cultural evolution, and the problem of memes: What are they? Where are they? What do they do? While the general case does interest me, culture is so various that it is impossible to think about it directly. One has to think about specific cases. As details are important, I want to choose a fairly specific case, that of jazz in mid-20th-Century America. I want you to imagine that you’re in a jazz club in, say, Philadelphia, in, say, mid-October of 1952. It’s 1:30 in the morning, and the tune is Charlie Parker’s “Dexterity.” The piano player counts it off–ah one, ah two, one two three four…

Genes and phenotypes play certain roles in a more or less standard account of biological evolution. The phenotype interacts with the environment, where it either succeeds or fails at reproduction, depending on the “fit” between its traits and that environment. Where the phenotype is successful at reproduction, it is the genes which are said to carry heredity from one generation to the next.

In one very widespread account genes are said to be replicators. That is to say, replication is the role they play in evolutionary change. Here’s what Peter Godfrey-Smith has to say about that (The Replicator in Retrospect, Biology and Philosophy 15 (2000): 403-423.):

In The Selfish Gene (1976), Richard Dawkins had argued that individual genes must be seen as the units of selection in evolutionary processes within sexual populations. This is primarily because the other possible candidates, notably whole organisms and groups, do not “replicate.” Organisms and groups are ephemeral, like clouds in the sky or dust storms in the desert. Only a replicator, which can figure in selective processes over many generations, can be a unit of selection.

However, I don’t particularly like the term “vehicle.” As Godfrey-Smith has noted, following others, it is a gene-centric term, characterizing what entities do from the so-called “gene’s eye” perspective. I’d prefer a more neutral perspective and so will use a term coined by Richard Hull, “interactor.” Here are definitions as Godfrey-Smith gives them:

In view of Sean’s post about Andrew Smith’s take on linguistic replicators I’ve decided to repost this rather longish note from New Savanna. I’d orignally posted it in the Summer of 2010 as part of a run-up to a post on cultural evolution for the National Humanities Center (USA); I’ve collected those notes into a downloadable PDF. Among other things the notes deal with William Croft’s notions (at least as they existed in 2000) and suggests that we’ll find language replicators on the emic side of the emic/etic distinction.

I’ve also appended some remarks I made to John Lawler in the subsequent discussion at New Savanna.

* * * * *
There’s been a fair amount of work done on language from an evolutionary point of view, which is not surprising, as historical linguistics has well-developed treatments of language lineages and taxonomy, the “stuff” of large-scale evolutionary investigation. While this work is directly relevant to a consideration of cultural evolution, however, I will not be reviewing or discussing it. For it doesn’t deal with the theoretical issues that most concern me in these posts, namely, a conceptualization of the genetic and phenotypic entities of culture. This literature is empirically oriented in a way that doesn’t depend on such matters.

In particular, I want to deal with the arbitrariness of the sign. Given my approach to memes, that arbitrariness would appear to eliminate the possibility that word meanings could have memetic status. For, as you may recall, I’ve defined memes to be perceptual properties – albeit sometimes very complex and abstract ones – of physical things and events. Memes can be defined over speech sounds, language gestures, or printed words, but not over the meanings of words. Note that by “meaning” I mean the mental or neural event that is the meaning of the word, what Saussure called the signified. I don’t mean the referent of the word, which, in many cases, but by no means all, would have perceptible physical properties. I mean the meaning, the mental event. In this conception, it would seem that that cannot be memetic.

That seems right to me. Language is different from music and drawing and painting and sculpture and dance, it plays a different role in human society and culture. On that basis one would expect it to come out fundamentally different on a memetic analysis.

This, of course, leaves us with a problem. If word meaning is not memetic, then how is it that we can use language to communicate, and very effectively over a wide range of cases? Not only language, of course, but everything that depends on language. END_OF_DOCUMENT_TOKEN_TO_BE_REPLACED