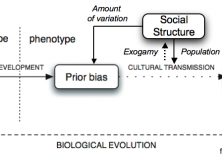 A cultural evolution approach to language suggests that genes encode weak prior biases that can be amplified through cultural transmission to produce strong language universals.  Below is a diagram from Kirby, Dowman & Griffiths (2007).

Similarly, studies of bilingualism are also pointing towards a short-term link.  Children brought up in bilingual environments develop theory of mind earlier, metalinguistic awareness earlier, better executive control and exhibit differences in their approaches to learning (e.g. mutual exclusivity).  This suggests that linguistic prior biases can be affected in the short-term by the amount of variation in the input. Furthermore, linguistic variation is often supported by social structures (e.g. two communities that trade).

Below is an adaptation of the diagram above which includes social structure and some examples of process that affect cultural transmission and prior biases:

I’m not entirely happy with this adaptation – a potentially misleading aspect is that it blurs the distinction between the community and the individual – however, it illustrates my point – that social structure should be an integral part of a cultural evolution view of language.

Although we can see that these short-term processes happening in modern times, were they also active at earlier stages of language evolution?  Scott-Phillips and Kirby (2010) make a distinction between language evolution and language change (see diagram below).  Would social structures have affected language structure at the protolanguage stage?  Population size has already been invoked as a factor in the preadaptations for and co-evolution of language (Dunbar, 1998).

A long-running debate about protolangugae is the analytic versus the syntactic route to grammar.  Very briefly, the analytic hypothesis suggests that utterances started out long and holistic, but random correlations between strings and meanings were analysed by language learners until compositional patterns emerged.  The synthetic hypothesis suggests that utterances started out small and specific and were brought together to form more complex meanings.  In other words, did language make up or break up?

The two hypotheses are, of course, not mutually exclusive.  One possibility is that they are different extremes of the same process.  We could view the analytic/synthetic processes as being related to inhibition and integration.  When analysing utterances, inhibition is needed to focus on a particular part of the utterance/meaning and block out the rest.  When synthesising utterances, sounds and meanings need to be integrated.  Bilinguals appear to be better at inhibition tasks (e.g. task switching), but worse at integration (e.g. word retrieval).  This has prompted Sorace (2011) to ask whether these two preferences are extremes of the same executive control mechanism that have been tuned to different tasks.  Bilinguals need better inhibition to deal with codeswitching and suppressing words and structures in one language while speaking another.  Monolinguals, on the other hand, can afford to divert more resources towards integration.

Therefore, analysis is more likely to be done by bilinguals and synthesis is more likely to be done by monolinguals.  If this is possible, then the debate over whether proto-communities were monolingual or bilingual becomes very relevant.  However, rather than arguing that one or the other was most prevalent (see here and here), it’s possible that both processes were active over successive generations as the community structure changed.

This hypothesis will require supporting evidence from many areas, and is just one of a number of new developments in the field which are encouraging interdisciplinary approaches.

Sorace, Antonella (2011). Pinning down the concept of “interface” in bilingualism Linguistic Approaches to Bilingualism, 1 (33)