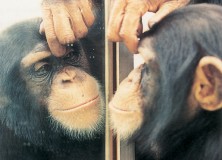 Darwin made a mistake. At least that is what Derek Penn and his colleagues (2008) claim in a recent and controversial paper in Behavioral and Brain Sciences. Darwin (1871) famously argued that the difference between humans and animals was “one of degree, not of kind.”

This, according to Penn et al. is of course true from an evolutionary perspective, but in their view,

They hold that humans are not simply smarter, but human cognition differs fundamentally and qualitatively from that of other animals.

One pervasive proposal is that we do not simply possess a unique set of cognitive capacities, but that it might be consciousness itself that is uniquely human as well, a view that goes back at least to Descartes (Burkhardt & Bekoff 2009: 41). However, there are also many scholars and researchers who agree that there is evidence for higher-order cognition in nonhuman animals ( ‘animals’ after this) and that they might possess at least some degree of consciousness (Burkhard & Bekoff 2009: 40f.).

In this and my next post, I will write about three kinds of phenomena that are most often discussed in debates on whether animals have some form of higher-order cognition and consciousness or not: self-awareness, awareness of one’s own cognitive states, and awareness of others’ cognitive states and intentions.

In the article by Penn and colleagues (2008) mentioned above, it is argued that it is our evolved capacity for relational, role- and rule-governed analogical thought that fundamentally transforms human cognition (see also Deacon 1997: 435-438).

Apart from this proposal and the idea that consciousness might be the rubicon separating humans and animals, there are, of course, countless other proposals for what it is that makes humans unique. These include, for example, language (Bickerton 2009), symbolic thought (Deacon 1997), unique social cognitive capacities and motivations (Carpenter 2011), the capacity for mental time travel and autobiographic memory (Suddendorf & Corballis 2007) or conscious, higher-order, domain-general intelligence (Evans 2003) (see also these posts, i, ii, iii, iv).

As these examples amply demonstrate, the debate on human uniqueness and animal consciousness are hot and controversial topics in the philosophy of mind and cognitive science more generally. One seemingly insurmountable problem that immediately arises is of course what we mean by the term ‘consciousness’ in the first place (e.g. Blackmore 2010: 8ff.; Burkhardt & Bekoff 2009: 40f.).

However, it is widely acknowledged that there are at least some behavioural and physical criteria that can be taken as indicators for at least some form of consciousness (Blackmore 2010: 208f.).

Three behaviours that have been highlighted repeatedly in debates of this kind. :

In this posts I will deal with mirror self-recognition. I’ll discuss the other two in my next post. These capacities are most often mentioned in discussions of the mentality of primates, especially great apes, but there are also relevant results from other ‘clever’ species outside the primate lineage such as, for example, dolphins (e.g. Herman 2009), ravens, and elephants (Blackmore 2010: 208ff.).

When they are about 18 months of age, children begin to recognize themselves in the mirror. This is tested by applying a spot of rouge somewhere the child cannot see it by herself, e.g. her forehead, without the child noticing. By about 18 months of age, children begin to notice and touch the spot on their forehead when they stand in front of a mirror. Around the same age, children also start using personal pronouns to refer to themselves, such as ‘me’, ‘mine’, and ‘I.’ Together with some other indicative behaviours at this age this has been taken as evidence for the emergence of a concept of self and of consciousness of one’s own self around that age (Lewis 2005: 363). 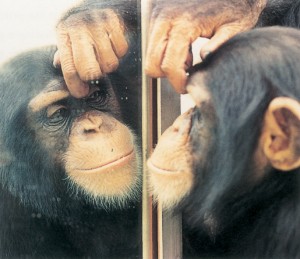 Similar methods have demonstrated mirror self-recognition (MSR) in a number of other species, including the great apes (chimpanzees, bonobos, orangutans, gorillas), but also elephants, dolphins and magpies (Blackmore 2010: 210-214). Although there were also some claims that some monkey species (e.g. macaques and cotton-top tamarins) could recognize themselves in a mirror, these results could either not be replicated or were flawed methodologically (Anderson & Gallup 2011). 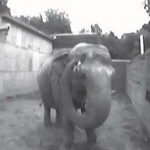 If we take MSR to be evidence for a concept of self, self-awareness, and consciousness, than this would mean that the species mentioned above who pass this test have some form of consciousness. However, there is a lively debate revolving around this contentious issue and it is possible that MSR only requires some form of complex body-concept. This means that MSR might not imply self-consciousness but just the ability to represent “body schemas, rather than cognitive schemas: i.e., awareness of oneself as a physical entity rather than awareness of oneself as a psychological entity” (Gómez 2009: 46). 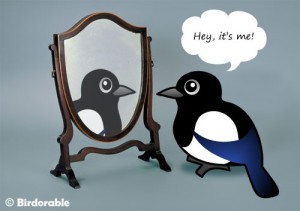 The results of the following experiment do indeed suggest that MSR is not equivalent to conscious self-awareness: In a scenario similar to that of MSR, three- and five-year old children were filmed while playing with an experimenter, in the course of which the experimenter surreptitiously attached a sticker to the child’s forehead. When the children were shown a video of what just happened immediately afterwards, only the five-year-olds touched their foreheads when they saw what happened in the video. Three-year-olds, on the other hand, seemed not to be able to integrate information about their past self into a coherent, conscious present self and did not realize that the sticker was still on their forehead (Gopnik 2009:146).

Consequently, it is not clear whether animals passing the MSR test possess this important aspect of self-awareness, i.e. whether they are capable of perceiving themselves as a continuous, conscious entity, and have an autobiographic memory (Burkhard & Bekoff 2009: 40f.; Suddendorf & Corballis 2007).

In my next post (UPDATE: which you can find here) I will deal with the two other markers for some kind of higher-order cognition in animals: kowing what and that you know (metacognition) and knowing about others’ mental states (mentalizing/theory of mind/metacognition of other’s mental states)

Bickerton, Derek (2009): Adam’s Tongue: How Humans Made Language. How Language Made Humans.New York: Hill and Wang.

Gopnik, Alison (2010): The Philosophical Baby: What Children’s Minds Tell Us About Truth, Love and the Meaning of Life.London: Bodley Head.