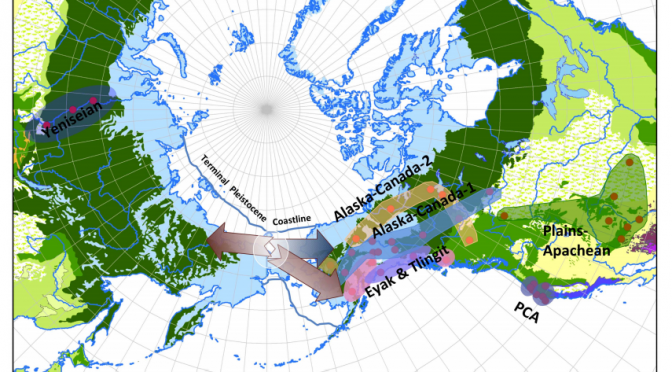 It finally happened! A press release from PLOS landed in my inbox with the words “Language Evolution” in the title!

The paper’s “Linguistic Phylogenies Support Back-Migration from Beringia to Asia” by Sicoli and Holton. Given that PLOS have released this as a press release, the media may well pick it up, so I’ve made a quick and easy-to-read list of details which probably won’t reach the papers:

What? Phylogenetic models applied to linguistic data to make inferences about human migration into and out of North America.
Why? Hypothesis testing/model fitting an Out-of-Beringia (to Asia) hypothesis compared to an Out-of-Central Asia (to North America) hypothesis.
Languages? North American languages and Central Siberia languages – about 40 languages (2 Yeniseian languages, 37 Na-Dene languages and Haida (isolate))
What’s the data? Binary coded 116 typological features (26 of which were excluded later for being “uninformative”). Data from Sherzer’s An areal-typological study of American Indian languages north of Mexico, the Alaska Native Language Archive and other grammars
Methods? Bayesian likelihood modelling (using Markov Chain Monte Carlo methods in MrBayes) and neighbour joining distance methods (using NeighborNet and SplitsTree4)
Results? The  Out-of-Beringia model fits better (the results section is massive, you should go and read it if you’re interested in the details). This model supports the story that there was a back-migration into Asia from Beringia, which is in contrast to recent arguments that the connections between Na-Dene languages and Yeniseian languages show that the Native Americans migrated from Central Asia.

This seems to be a reasonably solid piece of work, though I should leave it to someone else to assess the legitimacy of the statistical analysis/results. It’s nice to see also that the press release does state that: “the authors cannot conclusively determine the migration pattern just from these results, and state that this study does not necessarily contradict the popular tale of hunters entering the New World through Beringia, it at the very least indicates that migration may not have been a one-way trip.” Back-migration is rarely considered when testing hypotheses using models for serial-founder effects – and I think this must happen more than we often assume in linguistic phylogenies.