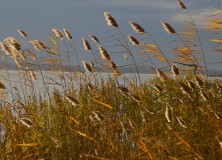 Here’s a video of a lecture Lakoff recently gave at the Central European University. It’s cued to the beginning, but the segement that particularly interests me starts at about 11:03:

The specific point that interests me concerns the verb “to meander.” Here’s what Lakoff says; he’s talking about work done by Teenie Matlock:

Why does that interest me? “Kubla Khan”, what else?

Where Alph, the sacred river, ran
Through caverns meaureless to man
Down to a sunless sea.
So twice five miles of fertile ground
With walls and towers were girdled round:

Five miles meandering with a mazy motion
Through wood and dale the sacred river ran,

Finally, I do have a quibble with this FORM IS MOTION business. It is this, when researching Beethoven’s Anvil I looked at some of the literature on navigation and found that, contrary to my intuitions, that navigation by landmarks is a secondary method, not primary. The primary method is dead-reckoning. In dead-reckoning distance traversed is a function of elapsed time and speed. If you walk for three hours (on one heading) at the rate of four miles per hour you will have traversed 12 miles.

What’s interesting is that speed conflates/combines time AND space. And it seems to be primitive here. Whatever the nervous system is doing, it’s NOT noting distance and then dividing by time to come up with speed. Why not? Because you can’t do that until the traverse is complete. Rather, it’s got an ongoing estimate of speed and that’s what it uses.

I’ve not read their latest stuff on this, on the one hand, nor have I really tried to think this through, on the other hand. So maybe they’ve got it all worked out. But at the moment I’m thinking they don’t.

Also, THIS has to be differentiated from judging form relative to eye movements used to trace form, which Lakoff and Turner alluded to in More Than Cool Reason. These are two different mechanisms, eye tracing and navigation. They may both involve time and space, but they’re neurally and functionally different. How does THAT difference show up in language?

Addendum: These are just notes:

Lakoff is discussing Narayanan’s work (c. 16:00): The neural system that runs the body – “that will tell you how to do it” – also runs language. Translation: we have episodic vs. systemic cognition – terms from the model David Hays developed with his students in the 1970s, though also common in the cognitive science of the time. The episodic system that coordinates body motion ALSO “runs” NL semantics (but not NL articulation or writing). This is where we get aspect. Aspect is associated with modality in the Hays model & you can find in there in Mechanisms of Language (I’ve not actually checked to see if aspect is discussed as such, but the machinery is certainly there..

Terry Regier: Compute image schemas from combinations of topic maps in the brain, both sensory and motor.

At birth: 100 billion neurons at birth. 1000 to 10K connections each. These have been drastically trimmed back by 5 years.

c. 35:00 or so, maybe a bit earlier or later, Lakoff discusses frames. Mentions Fillmore. So far this is all stuff from the 1970s. Bottom-level frames are realized in terms of image schemas.

c. 45:00: Cascades. Stanislaw Dehaene on reading. Numbers and letters are recognized in different parts of the brain. Neural ensembles linked across different neurofunctionalareas (NFA’s, my term) that operate together in a unitary act of recognition or cognition. Lakoff talks about layers, with ensembles linked across layers. So, we’ve got a cascade that gives us a shape 5 or so layers in. Letters are recognized at the next layer in one NFA while numerals are recognized at the next layer in a different NFA. These cascades are “active all the way down.” Hence the term cascade.

And, wouldn’t you know, “meaning works the same way.” But the cascades are more complex.

c. 54:00: Across is a relation where a trajector moves from one (topographic) region to another where there is yet a different region in between the two containing the terminal points of the path. The one in between is called the landmark. Across would be at the relational level in Powers’s hierarchy and episodic in Hays.

But, you know, doing this all at the neural level is a bit like trying to figure out what a computer is doing by examining the travel of impulses in the physical circuits. It’s not quite that bad, but it’s in that direction. There doesn’t seem to be anything like the notion of degress that Hays and I have (cf. Principles and Development of Natural Intelligences).

c. 1:04:50: Two kinds of neural firing, one involving neurotransmitters and the other involving charges. We’ve got a soup of neurochemicals in synaptic space. Neurotransmitters permit the flow of potassium (out) and sodium ions (in) to and from neurons. Charges build up inside the center of the neural cell body and then fire down the axon (when a threshold has been reached), letting sodium ions in as the charge moves down the axon, and when it reaches the ends of the dendrites (Lakoff’s pods) neurotransmitters are released into the synaptic cleft.

[Lakoff overdoes it with the “awesomeness” of it all.]

c. 1:08:00: Grammar links up structure of grammar & structure of meaning through the cascades, via the coordinating “nodes.”