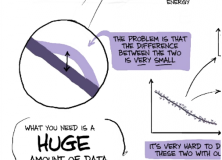 It’s not about cultural evolution, but I think most people who have even a passing interest in science are gearing up to welcome Higgs Boson to the elementary particle party. Anyway, here’s a nicely put together video on explaining what the Higgs Boson is and why its discovery is significant:

The Higgs Boson Explained from PHD Comics on Vimeo.

There’s also a more general point about needing to gather a huge amount of data (15 petabytes a year — enough to fill more than 1.7 million dual-layer DVDs a year) to find the very small effect size that is predicted for the Higgs Boson. In itself, data of this magnitude will likely come with significantly more noise, which means physicists have needed to develop well-defined statistical methods (they even have their own statistics committee). It really is a massive achievement for modern science.