In a series of posts, I’ve been discussing constraints on the evolution of colour terms. For the full dissertation and references, go here.

This section reiterates how a link between linguistic categories and perception fits into Niche Construction Theory.  If concepts can influence perception, and people share the same concepts, their perceptions will become synchronised.  This would render them more effective at communication, since referents would be perceived as similar (‘red’ can refer to the same domain of entities for each individual).  Furthermore, it may render them more able to co-operatively build a better model of the actual environment (for instance, describing an unseen danger, or researching physics).  However, this will only be true if language is grounded in constraints that come from the actual environment.  If this were not the case, apart from being inefficient at describing the actual environment, a language may drift to influence the perceived environment in a way that results in a worse fit with the actual environment. 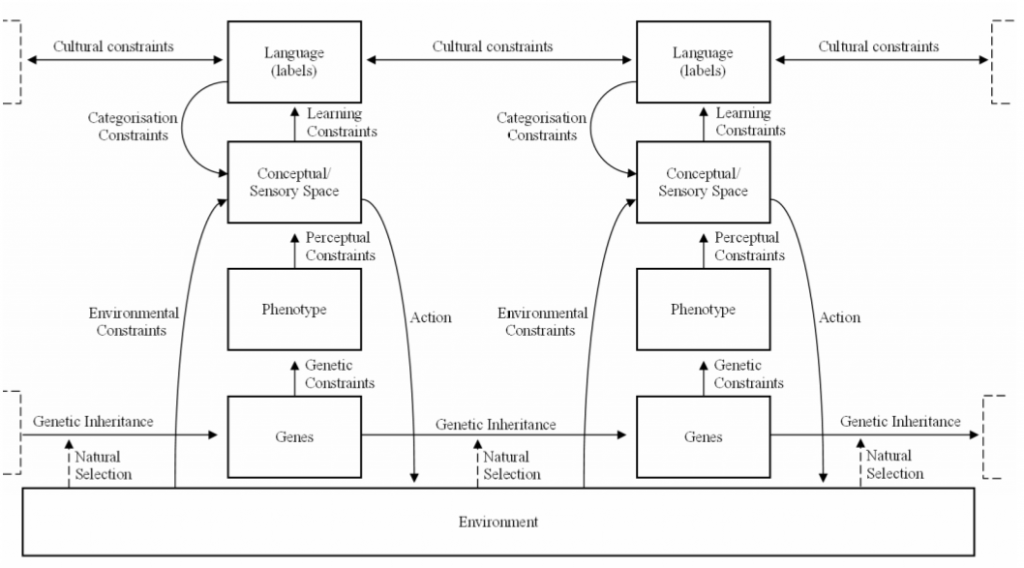 Returning to the constraints diagram (above), note that the influence of categorisation continues, through action, to change the environment.  In other words, if language influences the perceived environment and facilitates communication, then it may also facilitate the way we change the actual environment.  In this sense, language’s influence on perception can be regarded as a form of Niche Construction (Laland, Odling-Smee & Feldman, 2000).  Therefore, not only does language become better at describing the actual environment, but the environment becomes better suited to being described by language.  This creates a better fit between perceived and actual environments and possibly increases the fitness of language users.  Essentially, then, this study presents evidence for language-specific niche construction where language can influence the environment.  This dynamic would be a consequence of an Embodied system, and more efficient as part of an Embodied system than a Symbolist account.  I therefore argue that the Embodied account is supported.

As an example of this dynamic, Hansen et al. (2006) showed that perception is affected by semantic knowledge, specifically that achromatic bananas look yellow.  However, bananas are domesticated (Heslop-Harrison & Schwarzacher, 2007).  The link between a banana’s structure and colour, therefore, is a constructed niche – cultivators fertilise the ‘best’ bananas, which go on to influence the way they perceive bananas, which affects which bananas they fertilise, and so on.  This means that the effect found in Hansen et al. cannot be innate, since the colour and structure of a banana have changed (see below).  Modulating perception with flexible, high-level categories is a way of keeping up with rapidly changing environments.

Less anecdotally, Griffin’s (2006) model, which classified objects using colour (see section 5.2.2), found that natural colour categories optimally aid the identification of objects.  Furthermore, the model performed equally well for natural and manufactured objects.  That is, manufactured objects have been coloured to be maximally classifiable by colour, according to linguistic colour categorisations.  This would be an intuitive and efficient tactic if, as Embodied Cognition suggests, comprehension is scaffolded onto systems of object recognition (MacWhinney, 1999).  There would be no advantage in doing this in a Symbolist system where perceptions and concepts have arbitrary connections.

Next, why universal patterns are not evidence for innate constraints ->