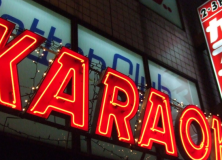 Evolang is over, but I have a backlog of posts to get out!

The idea that language change can be biased by the cognitive profiles of its learners has attracted a lot of interest (see Hanna’s post), and was a frequent topic of discussion at Evolang.  In the talk by James Winters and I, we urge a pluralistic approach involving statistical tests, models and experiments.  Here I describe some of the new studies relating to this presented at the conference.

Agents played communication games with others to settle on the mapping they use.  Mühlenbernd & Franke used two types of agent:  The rational agent which chooses the rationally best response and reinforcement learners based around a Polya-Urn model.  However, this factor didn’t make a significant difference in the results presented in this talk.

The main focus was the structure of the social network that determined which agents interacted.  Small world networks were generated using the Watts-Strogatz method which creates a variety of networks with certain degree and centrality features.  The social structure was held constant within each run, then the results over several runs were analysed.  Homogeneity always emerged, although the reinforcement learning maintained a higher number of ‘language regions’ (where connected agents used the same mappings) for longer.  These langauge regions tended to form in tightly connected regions of the network, not surprisingly.  Mühlenbernd & Franke looked at the properties of the langauge regions, including how early agents settled on a mapping (early vs late learners) and the strategies of agents on the border between dense communities (border agents).

Interestingly, there was a big overlap in late learners and border agents.  That is, people on the border between two communities tend to be late learners.  This offers an interesting take on the hypotheses linking second language learners and linguistic change.  Lupyan & Dale (2010) find a correlation between group size and morphological complexity.  They suggest that the cognitive profiles of L2 learners biases language change towards morphologically simpler languages.

This hypothesis is further supported by the work of Christian Bentz and Bodo Winter (not to be confused with James Winters, founder of this blog) also presented at this conference which shows that the ratio of L1 to L2 speakers of a language correlates with morphological features (number of cases, cast syncretism and case symmetry), while controlling for language family and geographic region.  However, as I suggested in my talk with James Winters, backing up a statistical correlation with another statistical correlation is not as powerful as running an experiment or a model.

Mühlenbernd & Franke’s model might provide some insight into this problem.  It shows that people who are the most likely to be in contact situations (on the borders of communities) are also more likely to be late learners.  If late learners in the model can equate to L2 learners, then this suggests a closer link than previously hypothesised between L2 learners and langauge change.  It would be interesting to think more about this dynamic.  However, Franke urged caution in interpreting the model in this way, since the concept of a ‘late learner’ is fairly abstract.

As a side note, Bart de Boer raised the intriguing idea you could use statistical analyses like Bentz and Winter’s to find exceptions to the rule.  Rather than them being problematic, perhaps by studying the causes of change in these exceptions, a clearer idea of the role of L2 speakers could emerge.

What’s clear is that there is an emerging body of work surrounding the linguistic niche hypothesis using statistical and modelling techniques.  Combined with Hannah Little’s experiment on this phenomenon, I’m wondering how long before we get a special issue on this subject.

2 thoughts on “Evolang coverage: Network structure and the effect of L2 learners on language change”