Most of you in the science blogosphere have probably come across Razib’s recent post on linguistic diversity and poverty. The basic argument being that linguistic homogeneity is good for economic development and general prosperity. I was quite happy to let the debate unfold and limit my stance on the subject to the following few sentences I posted previously:

From the perspective of a linguist, however, I do like the idea of really obscure linguistic communities, ready and waiting to be discovered and documented. On the flip side, it is selfish of me to want these small communities to remain in a bubble, free from the very same benefits I enjoy in belonging to a modern, post-industrialised society. Our goal, then, should probably be more focused on documenting, as opposed to saving, these languages.

Since then, the debate has become a lot more heated, with Neuroanthropology wading in against Razib, which, in the second-half of the post at least, is worth reading just to get the general flavour of the other side in this debate. Having said that, I wasn’t convinced by the evidence Greg Downey used to dismiss Razib’s hypothesis, so I decided to actually look at the literature on the subject. The first paper I found upon searching was one by Nettle et al, in which they examine the relationship between cultural diversity and societal instability using a large cross-national data set of 212 nations. Importantly, they look at cultural diversity in the context of three areas: linguistically, ethnically and religious affiliation. Also, they draw a distinction between within-nation (alpha) diversity and between-nation (beta) diversity. Lastly, unlike other studies on the subject, where simple regression or correlation methods are used, the current study employs structural equation modelling (SEM):

SEM is a multiequational modeling system suitable for asking complex questions about the responses of systems to interconnected sets of explanatory factors [9,10]. Using SEM we probed the contributions of multiple cultural diversity measures to international variations in economics and societal instability. We evaluated the direct and indirectly-mediated effects of linguistic, religious, and ethnic diversity (both within-nations and across-nations) on indicators of societal instability while controlling for the correlated effects of population size and number of borders.

Looking at these factors, rather than using economic performance, the current study’s key finding is that more diversity is associated with more instability. What’s really interesting, however, is that different types and domains of diversity have interacting effects. As Razib predicted, linguistic diversity does have a negative effect on economic performance — and it is through this economic mechanism that societal instability increases. This is true for both within and between measures of diversity. On the other hand, religious diversity between-nations produces the opposite effect: it reduces instability. Now, the surprising part is that religious diversity is especially effective at reducing instability in the presence of high linguistic diversity. 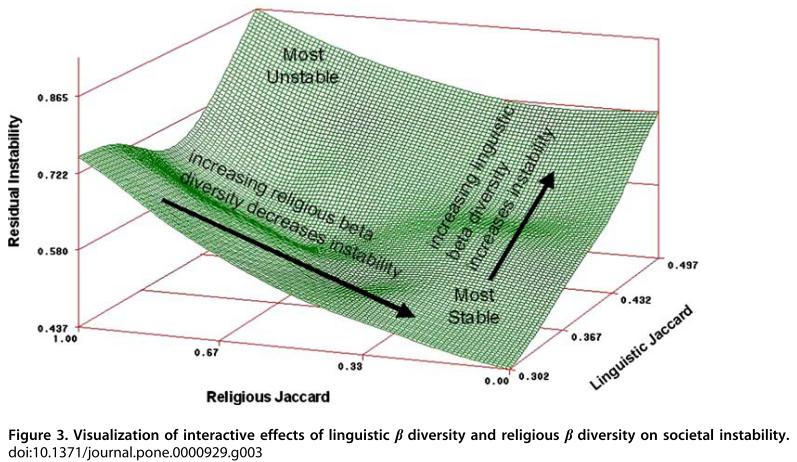 But why should large religious variability between neighbours produce this stabilizing effect? The authors offer one interesting solution:

Alexander [19] argued that religions are cultural inventions which function to extend nations, suggesting that the unit of a ‘nation’ is an emergent property of unifying distinctive belief systems. It therefore may be that a shared religious or moral system within a country which differs from those surrounding countries leads to a sense of shared identity, common purpose or harmony.

I don’t expect this to be the final say on the matter, and, like all studies looking at such a complex subject matter, there are limitations to the scope of current study (some of which are noted in the paper). It also doesn’t really solve the question as to why linguistic diversity is correlated with poor economic performance. This is clearly a job for economists. Though, for now at least, I’m reasonably convinced by Razib’s take on the matter.