Clocking in at under 40 mins for the all three parts, the series provides a good primer on the basic principles underpinning modern evolutionary theory and how this relates to our minds, the environment and culture. 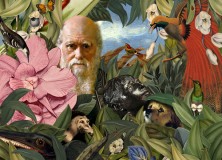 Lately, I took time out to read through a few papers I’d put on the backburner until after my first year review was completed. Now that’s out of the way, I found myself looking through Berwick et al.‘s review on Evolution, brain, and the nature of language. Much of the paper manages to pull off the impressive job of making it sound as if the field has arrived on a consensus in areas that are still hotly debated. Still, what I’m interested in for this post is something that is often considered to be far less controversial than it is, namely the notion of mental representations. As an example, Berwick et al. posit that mind/brain-based computations construct mental syntactic and conceptual-intentional representations (internalization), with internal linguistic representations then being mapped onto their ordered output form (externalization). From these premises, the authors then arrive at the reasonable enough assumption that language is an instrument of thought first, with communication taking a secondary role:

In marked contrast, linear sequential order does not seem to enter into the computations that construct mental conceptual-intentional representations, what we call ‘internalization’… If correct, this calls for a revision of the traditional Aristotelian notion: language is meaning with sound, not sound with meaning. One key implication is that communication, an element of externalization, is an ancillary aspect of language, not its key function, as maintained by what is perhaps a majority of scholars… Rather, language serves primarily as an internal ‘instrument of thought’.

If we take for granted their conclusions, and this is something I’m far from convinced by, there is still the question of whether or not we even need representations in the first place. If you were to read the majority of cognitive science, then the answer is a fairly straight forward one: yes, of course we need mental representations, even if there’s no solid definition as to what they are and the form they take in our brain. In fact, the notion of representations has become a major theoretical tenet of modern cognitive science, as evident in the way much of field no longer treats it as a point of contention. The reason for this unquestioning acceptance has its roots in the notion that mental representations enriched an impoverished stimulus: that is, if an organism is facing incomplete data, then it follows that they need mental representations to fill in the gaps.