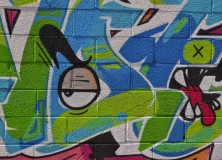 When I began my most recent series of posts on memes, I did so because I wanted to think specifically about language: Does it make sense to treat words as memes? That question arose for a variety of reasons.

In the first place, if you are going to think about culture as an evolutionary phenomenon, language automatically looms large as so very much of culture depends on or is associated with language. And language consists of words, among other things. Further, historical linguistics is a well-developed discipline. We know a lot about how languages have changed over time, and change over time is what evolution is about.

But THAT’s not quite how I put it going into that series of posts. Of course, I’ve known for a long time that words have forms and meanings. I don’t know whether it was my freshman year or my sophomore year that I read Roland Barthe’s Elements of Semiology (English translation 1967). That gave me Saussure’s trilogy of sign, signifier, and signified, the last of which seemed rather mysterious: “the signified is not ‘a thing’ but a mental representation of the ‘thing’.” Getting comfortable with that distinction, between the thing and the concept of the thing, that took time and effort.

That’s an aside. Suffice to say, I got comfortable with that distinction. The distinction between signifier and signified was much easier.

And yet that distinction was not uppermost in my mind when I thought of language and cultural evolution. When I thought of memes. When I approached this series of essays, though some papers by Daniel Dennett, I thought of words they same way Dennett did, the whole kit and caboodle had to be a meme. It was the sign that’s the meme.

That’s not how I ended up, of course. That ending took me a bit by surprise. Coming down that home stretch I was getting worried. It appeared to me that I was faced with two different classes of memes: couplers and the other one. What I did then was to divide the other one into two classes: targets and designators. And to do that I had to call on that thing I’ve known for decades and split the word in two: signifier and signified. It’s only the signifier that’s memetic. Signifiers are memes, but not signifieds.

It took me a couple of months to work that out, and I’d known it all along.

Some years ago when I wrote Culture as an Evolutionary Arena (Journal of Social and Evolutionary Systems, Vol. 19, No. 4, pp. 321-362, 1996) I thought the way historical linguists looked at these things was a bit peculiar. Practical, yes. But still peculiar.

I’ve taken it as self-evident that items cross freely from one cultural lineage to another. That is, inheritance is horizontal as well as vertical. Yet historical linguists have tended toward taxonomic trees, which implies vertical inheritance. What happened to horizontal borrowings of words? They’re ignored, that’s what.

And that makes a kind of sense. When words are borrowed, they’re remade in the phonology of the borrowing language. And it’s that phonology that’s at the center of historical linguistics. Yes, a bit of syntax may get thrown in. But historical linguistics is mostly the history of phonological systems and the associated classification systems is mostly a classification of phonological systems.

And then we have creoles, which make a hash of that. As I put it in Culture as an Evolutionary Arena:

Those problems get even worse when one considers creolization, a process which brings about a much more intimate relationship between different languages than does borrowing. Creolization has most obviously occurred in the tropics, where European colonial powers used cheap agricultural labor brought in from African, India, and the Orient (Bickerton 1983, 1984). These creoles emerged from the interaction between Indo-European languages and a variety of languages from various non-Western peoples. Creoles emerge quickly (a few generations at most) and do so without ever having generated a language which could be considered a dialect of one of the source languages. Yet creoles having very different sources turn out to have many similarities with one another. Since these various creoles have arisen independently of one another, these similarities cannot reflect the putative common ancestor so important to comparative linguists; there simply is no common ancestor. Derek Bickerton argues that the similarities reflect the basic processes of the human neurolinguistic endowment. That is to say, these creoles get their core, not from any of their parent languages, but from human biology. It is as though that original moment when language first precipitated out of the prelinguistic matrix of human communication is, in a limited way, recreated in the emergence of a creole. The parental languages crash into one another so violently that they are shattered and the basic neuropsychological mechanisms of language create a new language incorporating fragments of the parental tongues into a new pattern.

Thus it is not surprising that creoles occupy a peculiar place in Rhulen’s taxonomy. Since he can’t really assign a creole to a [taxonomic position] based on the parental source of its linguistic core he places them all in phylum of their own, putting the group on the same level as the other phyla, such as Indo-Hittite, Afro-Asiatic (which includes Hebrew and Arabic), Altaic (which includes Turkish and Japanese), Amerind (the native languages of most of the Americas south of Canada), and about a dozen others. Given the complexity of the problem of classifying languages, this is not an unreasonable thing to do. But, even more than the fact that taxonomy doesn’t reflect the rather considerable borrowing that is common between languages, this particular fix obscures a very deep difference between cultural evolution and biological evolution. There is enough hybridization in biology to complicate matters a little, but it always occurs between closely related species. In language, borrowings and creolization are possible between any pair of languages, no matter how remote they are from one another. Distant borrowings, such as those English has from Arabic and Angolan, seem comparable to such biological oddities as a gnat with a gnu liver, a maple with ox limbs, or an eagle with the wings of a dragon fly. Biological creolization would beget snarks from the mating of pigs and sea urchins, and an egress from the coupling of a wildebeest and swamp grass. Such things are not possible in biology.

What is true of words and syntactic constructions is certainly true of culture in general. Cultural [traits] cross freely between lineages in a way that biological genes do not. Where the flow of [traits] is relatively small in relation to the entire [trait] complement of a culture we have borrowing. Where the flow of [traits] between parent cultures is so extensive that the resulting child culture owes significant debts to all parents we have creolization. Because culture is rich with borrowing and creolization we should not expect nor attempt to impose the neat genealogies (with some relatively restricted regions of reticulate interaction between lines) and orderly taxonomic trees we find in biology.

Note: I’ve substituted ‘trait’ where the original had ‘meme’ as my current usage is not quite compatible with that old usage.

I note that my treatment of historical linguistics in that paper is rather thin, which I find a bit embarrassing. But I don’t think a more robust treatment would change my central point, which is that by focussing on phonology, however well-motivated and reasonable such a focus is, historical linguistics obscures the importance of horizontal transfer among cultural lineages.

1 thought on “A Note on Memes and Historical Linguistics”