The origins of language, and how they change over time, are tricky topics.  We can’t travel back in time to observe how it happened, and we’re only just beginning to understand the range of variation in existing languages.  Traditionally, the study of language evolution was more of a philosophical enterprise, with many educated guesses and a lot of debate about theoretical distinctions.  But these days it’s clear that a much wider approach is needed.  Thinking about how so many diverse ways of communicating could have emerged in a single species (and that species alone) involves thinking about topics as diverse as genetics, animal communication, cultural evolution, emerging sign languages, and the history of human migration and contact (even Chomsky recently wrote of the importance of acquisition, pragmatics, computer science and neuroscience in understanding the language faculty!).

The new Journal of Language Evolution will tackle these issues by reaching out to new areas of research and by embracing new quantitative methods, as Dan Dediu discusses in the editorial of the first issue.  The issue includes an introduction to the linguistic diversity of planet Earth by Harald Hammarstrom, which demonstrates how important the work of language documentation (especially of endangered languages) is for shaping our ideas about what evolved.  Bodo Winter and also provide an introduction to mixed models and growth curves, which is becoming an increasingly important tool in the language sciences.  Extending the topics to pragmatics, Cat Silvey reviews Thom Scott Phillips’ book Speaking our Minds.

But if this isn’t deep enough into the frontiers of language evolution for you, there is also a debate on humidity and tone.  Caleb Everett, Damian Blasí and myself discuss the potential effects of our ecology on language evolution.  This includes obvious differences such as some languages having more specific words for relevant climatic factors (not just words for snow, but watch this space for news on that front), to the way the climate affects population movement.  We focussed on one controversial idea: dry air affects phonation accuracy, so some sounds should be harder to produce accurately in dry climates.  Over a long period of time, this might lead to languages changing to avoid these sounds.

Here’s a simple diagram of what we mean: 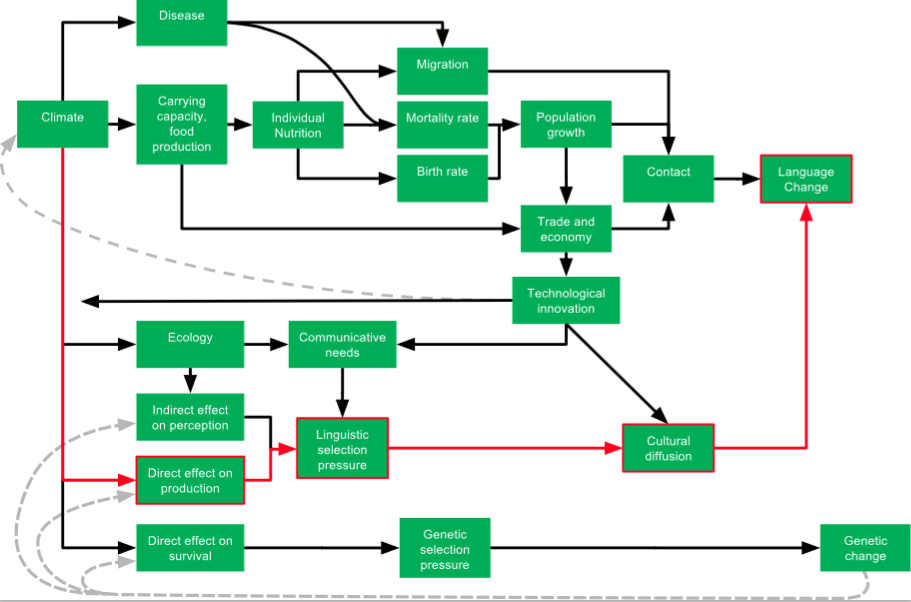 Last year we published a paper showing some support for this idea, and in this special issue researchers turned out in force to criticise it.

Bob Ladd and Carlos Gussenhoven provided case studies to show that it is a much more complex phenomenon than we have assumed – the dichotomy between ‘complex’ and ‘non-complex’ tone is not realistic.  Bart de Boer dug into the physics of speech to question how big the effect really is.  Jeremy Collins built models of the spread of tone over centuries to demonstrate how the patterns might just have appeared through being borrowed from neighbour to neighbor (you can read about his adventure here).  Carol Ember points out that there are psychological mechanisms that may underlie the linguistic differences.

Perhaps the strongest criticism comes from Harald Hammarstrom, who runs further statistical tests and determines that there is no relation between humidity and tone.  This is an important point for us, because without a global pattern to demonstrate that there is a meaningful effect, pursuing this topic is not sensible.  From his criticisms, I agree with the following: in the original study, there is no control for area and language family at the same time; The baseline comparison was not described in enough detail to meet standards of replicability, and Hammarstrom’s baseline is more appropriate; the within-continent tests did not control for historical relations, and the correlations may therefore be inflated.

To address these, and Hammarstrom’s other points, we wrote a more detailed response (see here – it’s supposed to be a supplementary material, but is not linked directly in the article for some reason), and made the code for replicating the findings available here (in R and python).

So, the criticisms have been tough, but I’m very pleased to see so many serious responses.  While many dialogs in Evolutionary Linguistics can get bogged down in arguments about theoretical distinctions or differences of opinion, it is refreshing that the first issue of the Journal of Language Evolution is a debate in which everyone is arguing with data, even if they are mostly skeptical.

I think the effect of climate on the way we speak is still interesting, though a lot needs to be done in future studies.  There are two basic questions that need to be answered.  First, how does cold air lead to a linguistic selection pressure against certain sounds?  Second, how does that selection pressure lead to global patterns in phonology through cultural evolution, competing with all the other pressures of change?

These are tough questions.  For example, the first can be broken down into a chain of causal effects, each of which needs to be worked out with more detailed studies: 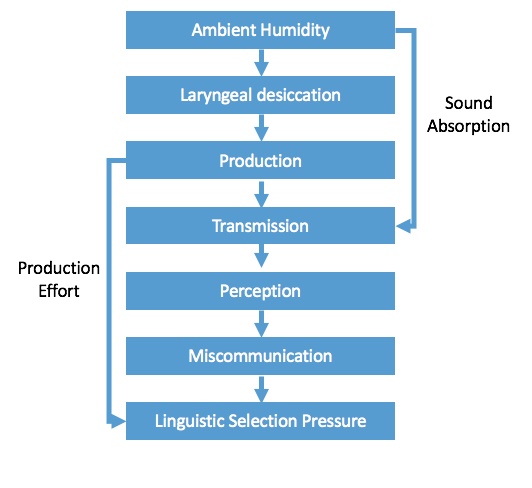 This is quite a complex task.  For example, the link between perception and miscommunication involves working out how contrasts in phonology are neutralized by the effects of climate in context.  In general, then, instead of focusing on tone, it should be possible to build up a profile for different phonetic segments about how ‘robust’ they are to phonation problems caused by dry air.  We should be able to see an adaptation of whole phonological systems across the world.  The simplest route to this would be in terms of production effort.

The question of cultural evolution can also be addressed in more detail.  In the main paper, we suggest that phylogenetic analyses of Bantu languages would be interesting, because of their historical route through different climates (and because we have some trees!).  This is complicated by the need for a good model of climate evolution, as well as linguistic evolution, but my preliminary results are interesting.

First, on the macro scale, I ran a test of discrete state evolution to try to get some diachronic evidence of correlation.  For Atlantic Congo languages, I classified languages as having simple or complex tone and being in a dry or humid place (split by 1st third of the humidity distribution).  I then ran two evolutionary models:  The independent model had a rate parameter for each transition between values within a variable (complex to non-complex, non-complex to complex, dry to humid and humid to dry) – that is, tone and humidity change independently from one another. The dependent model had a separate rate for moving to a simple tone system from a dry environment and from a humid environment.  The dependent model was a significantly better fit (log likelihood ratio =7.9, df = 1, p = 0.005), suggesting that changes in humidity and changes in tone are linked.

The two models are plotted below.  The dependent is on right.  Within each model, arrows in the same colour are controlled by the same parameter and their thickness indicates their strength. 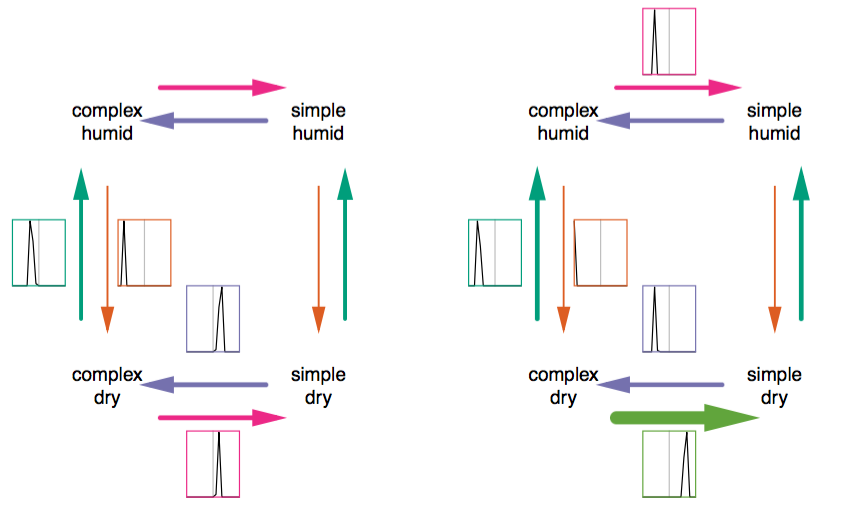 The results suggest that languages are more likely to lose tone in dry conditions (rather than gain tone in humid conditions).  However, a lot more needs to be done on this.  To start, as is mentioned above, the complex vs non-complex distinction is not good, and the historical predictions of the model need to be checked.  In the end, a much more complex geo-phylo model would be more suitable, with extra controls for all the stuff that Collins and Hammarstrom bring up.

But evidence doesn’t have to come from large-scale analyses.  We can also use statistics to pinpoint languages that would be suitable for closer, more qualitative case-studies.  I reconstructed the history of climate and tone in a phylogenetic tree, then looked for sub-sections of the tree that showed the highest variation.

Below, I’ve plotted the mean humidity of a sub-group of languages by the number of tonal contrasts.  They’re linked by the phylogenetic tree worked out by Currie et al., with inner nodes of the tree placed according to ancestral state reconstruction (a ‘phylomorpho space’, see R code). 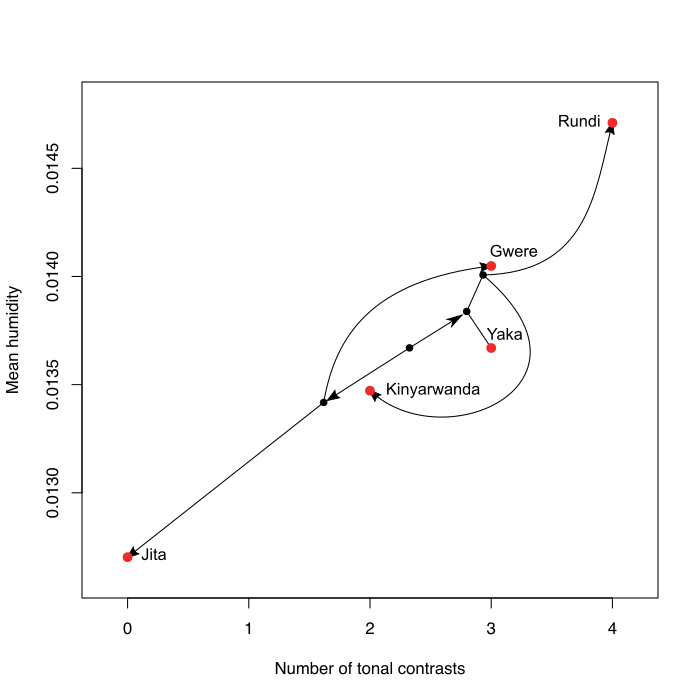 There’s a nice correlation between tones and humidity, but the phylogenetic history does not explain this by drift (Gwere is more similar to Rundi, despite being historically closer to Jita).  Rundi and Kinyarawanda share a common ancestor (also according to Glottolog), but diverge from each other in both humidity and tonal complexity.  I know nothing about these languages!  But it would be interesting to investigate further.

I’ve also talked about looking at a corpus analysis of individual people, and an iterated learning experiment in dry and humid conditions.  I’m not particularly invested in the theory here, and not really to the link to tone specifically.  I certainly haven’t seen any evidence for a concrete link between humidity and the evolution of phonology.  But it’s a complex question that requires a lot of different approaches and looking at lots of different sources of data, and that’s exciting to me.  Despite the justified criticism, I’m not going to give up on this topic just yet.

1 thought on “1st issue of The Journal of Language Evolution: discussion on tone and humidity”