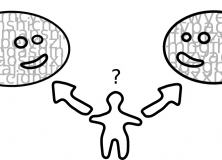 How many languages do you speak?  This is actually a difficult question, because there’s no such thing as a language, as I argue in this video.

This is a video of a talk I gave as part of the Edinburgh University Linguistics & English Language Society’s Soap Vox lecture series.  I argue that ‘languages’ are not discrete, monolithic, static entities – they are fuzzy, emergent, complex, dynamic, context-sensitive categories.  I don’t think anyone would actually disagree with this, yet some models of language change and evolution still include representations of a ‘language’ where the learner must ‘pick’ a language to speak, rather than picking variants and allowing higher-level categories like languages to emerge.

In this lecture I argue that languages shouldn’t be modelled as discrete, unchanging things by demonstrating that there’s no consistent, valid way of measuring the number of languages that a person speaks.

The slides aren’t always in view (it improves as the lecture goes on), but I’ll try and write this up as a series of posts soon.