In my last post I summed up some proposals for what (among other things) makes human cognition unique. But one thing that we should bear in mind, I think, is that our cognitive style may more be something of an idiosyncrasy due to a highly specific cognitive specialization instead of a definitive quantitative and qualitative advance over other styles of animal cognition. In this post I will look at studies which further point in that direction.

In addition, it has been shown that in tasks in the social domain, which are generally assumed to be cognitively complex, domesticated animals such as dogs and goats (Kaminski et al. 2005) fare similarly well or even outperform chimpanzees.

It is entirely possible that the first signs of human uniqueness where at first simply side-effects our self-domesticating lifestyle – the same way the evolution of social intelligence in dogs and goats is hypothesised to have come about –, acting on a complex primate brain (Hare & Tomasello 2005). 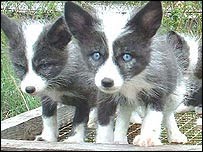 This line of reasoning is also supported by domesticated silver foxes which have been bred for tameness over a time period of 50 years but developed other interesting characteristics as a by-product: To quote from an excellent post on the topic over at a Blog Around the Clock (see also here): 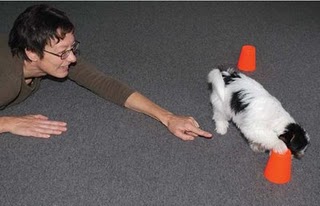 What seems most interesting to me, however, is another by-product of their experimental domestication: they also improved in the domain of social cognition. For example, like dogs, they are able to understand human communicative gestures like pointing. This is all the more striking because, as mentioned above, chimpanzees do not understand human communicative gestures like  helpful  pointing. Neither do wolves or non-domesticated silver foxes (Hare et al. 2005).

It is certainly a fact

“that Homo sapiens has become ‘localized’ by having to depend upon learned, culture-specific modes of interacting.” (Bruner 2005: 693).

Humans are constantly immersed in culture and social interactions and at the same time extremely dependent on it, and human ontogeny fundamentally differs from that of any other primate species. Human infants are even more helpless and completely dependent on others, and remain unable to feed and care for themselves for a uniquely long time span. Furthermore, childhood and adolescence are two additional and prolonged states of mental development and cultural learning absent in any other species. These phases seem to be vitally important for the development of culturally adept and cognitively highly sophisticated human beings (Locke & Bogin 2006).

The fact that social interaction, learning, and cultural transmission play such a vital and important role for children’s ongoing cognitive development suggests that they may have a biologically-based “adaptation for culture” which has to be operative from early on. Comparing young children’s and infants cognitive abilities with that of the other great apes may be a useful indicator of the biological foundations of what makes us uniquely human. In addition, we can gain crucial insights on what platform the evolution of human cognition could have started because chimpanzees are often described as a “conservative species” that has always lived in tropical forests, which is why they didn’t have to change as much as we did to adapt to fundamentally new environments and selection pressures. This also means that chimpanzees are more similar to the last common ancestor we shared with them than we are (Gazzaniga 2008: 51, this line of reasoning has been criticized quite heavily recently, however, especially since the detailed publications on Ardi).

If we now compare the performance of 2.5 year-old children and other great apes (in this case chimpanzees and orangutans) across a wide range of domains we indeed find that in some domains the differences are much more marked than in others (see also, this post). In the physical domain, which includes the understanding of space, quantity and causality, the subjects were tested by rewards that were out of reach and could only be retrieved with a stick (causality), or had to locate a reward that was not directly accessible but had to be located (space). In the social domain, subjects had to follow “an actor’s gaze direction to a target,” solve “a simple but not obvious problem by observing a demonstrated solution” (social learning), or understand what an actor intended to do, but in the end failed to. (intention attribution or Theory of Mind). 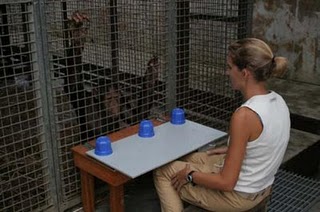 Generally, orangutans fared worst in most of the test, whereas chimpanzees and humans were quite similar in the physical domain. In some of the physical tasks, especially the one which required active tool use, chimpanzees even out performed human children. But in the causality tasks in which

children were better. They were also better in inhibitory and cognitive control in general, something that is expected given what we know about the disproportionate dominance and prominence of higher-order prefrontal circuitry, which better enable a child’s brain

“to coordinate processing among its millions of neurons in order to direct them toward future goals.” (Miller et al. 2002: 1131)

According to the research group that did these experiments

“the current results provide strong support for the cultural intelligence hypothesis that human beings have evolved some specialized social-cognitive skills (beyond those of primates in general) for living and exchanging knowledge in cultural groups: communicating with others, learning from others, and “reading the mind” of others in especially complex ways“ (Hermann et al. 2007: 1365).

But as indicated by children’s performances in the causality task, and in congruence with the models of human cognition I’ve outlined above, the social domain is not the only catch-all distinctive property of human minds. Instead, the ability to re-interpret cognitive data in terms of more abstract properties such as “unobserved causal forces” and “mental states” seems to be distinctive foundation for excelling performances in both the physical and social domains (see also my last post, and Penn et al. 2008). The authors find it plausible however, that

“understanding hidden causal forces evolved first to enable humans to understand the mental states of other persons, and this generalized only later to the physical domain.”

If we follow this line of reasoning we are justified in further looking for uniquely human attributes in the socio-cognitive development of children (but for a different view see Elizabeth Spelke’s critique that Iwrote about in in my last post).  This is whay in my next post I will look at studies that compare the social cognition of infants and chimpanzees in some crucial areas.

Locke, John L. and Barry Bogin. (2005) “Language and life history: A new perspective on the development and evolution of human language” Behavioral and Brain Sciences 29, 259–325.