In my previous post on linguistic replicators and major transitions, I mentioned grammaticalisation as a process that might inform us about the contentive-functional split in the lexicon. Naturally, it makes sense that grammaticalisation might offer insights into other transitions in linguistics, and, thanks to an informative comment from a regular reader, I was directed to a book chapter by Heine & Kuteva (2007): The Genesis of Grammar: On combining nouns. I might dedicate a post to the paper in the future, but, as with many previous claims, this probably won’t happen. So instead, here is the abstract and a table of the authors’ hypothesised grammatical innovations:

That it is possible to propose a reconstruction of how grammar evolved in human languages is argued for by Heine and Kuteva (2007). Using observations made within the framework of grammaticalization theory, these authors hypothesize that time-stable entities denoting concrete referential concepts, commonly referred to as ‘nouns’, must have been among the first items distinguished by early humans in linguistic discourse. Based on crosslinguistic findings on grammatical change, this chapter presents a scenario of how nouns may have contributed to introducing linguistic complexity in language evolution. 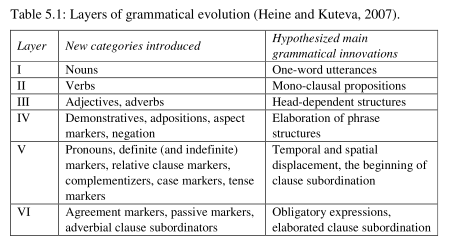 2 thoughts on “The Genesis of Grammar”