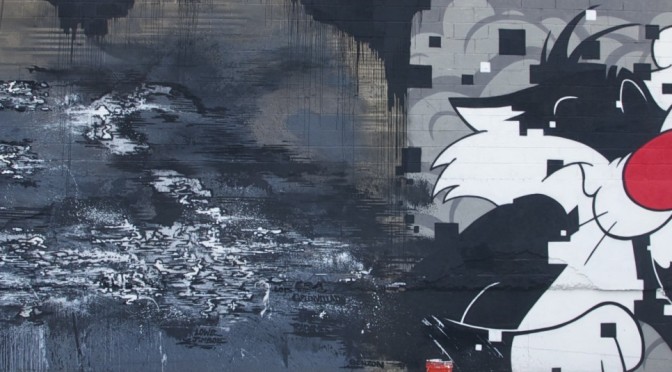 As soon as I finished up my series of posts about Matt Jockers, Macroanalysis: Digital Methods & Literary History, I set up a file on my Mac for further thoughts, knowing full well I’d keep thinking about the book. I’ve now posted the first of those continuing thoughts at 3 Quarks Daily: Macroanalysis and the Directional Evolution of Nineteenth Century English-Language Novels.

The issue is cultural evolution, a notion that Jockers flirts with, but rejects. Of course I’ve been committed to the idea for a long time and I’ve decided that his data, that is, the patterns he’s found in his data, constitute a very strong argument of conceptualizing literary history as an evolutionary phenomenon. That’s what my 3QD post is about, a fairly detailed (a handful of new visualizations) reanalysis of Jockers’ account of literary influence.

From Influence to Evolution

It is one thing to track influence among a handful of texts; that is the ordinary business of traditional literary history. You read the texts, look for similar passages and motifs, read correspondence and diaries by the authors, and so forth, and arrive at judgements about how the author of some later text was influenced by authors of earlier texts. It’s not practical to do that for over 3000 texts, most of which you’ve never read, nor has anyone read many or even most them in over 100 years.

Here, in brief, is what Jockers did: He assumed that, if Author X was influenced by Author Q, then X’s texts would be very similar to Q’s. Given the work he’d already done on stylistic and thematic features, it was easy for Jockers to combine those features into a single list comprising almost 600 features. With each text scored on all of those features it was then relatively easy for Jockers to calculate the similarity between texts and represent it in a directed graph where texts are represented by nodes and similarity by the edges between nodes. The length of the edge between two texts is proportional to their similarity.

Note, however, that when Jockers created the graph, he did not include all possible edges. With 3346 nodes in the graph, the full graph where each node is connected to all of the others would have contained millions of edges and been all but impossible to deal with. Jockers reasoned that only where a pair of books was highly similar could one reasonably conjecture and influence from the older to the newer. So he culled all edges below a certain threshold, leaving the final graph with only 165,770 edges (p. 163).

When Jockers visualized the graph (using Force Atlas 2 in the Gephi) he found, much to his delight, that the graph was laid out roughly in temporal order from left to right. And yet, as he points out, there is no date information in the data itself, only information about some 600 stylist and thematic features of the novels. What I argue in my 3QD post is that that in itself is evidence that 19th century literary culture constitutes an evolutionary system. That’s what you would expect if literary change were an evolutionary process.

Cultural Evolution Has a Direction

What’s particularly striking, though, is that this change is clearly directional, a matter I examine closely in my post. Another way to characterize Jockers’ graph is this:

The literary system is evolving in a 600 dimensional feature matrix. As time unfolds, the links between highly similar books trace a diagonal through the matrix.

Here’s what I said in one of my earlier posts (Reading Macroanalysis 7.3: Style, Genre, Time, and Influence):

Here’s what I’m thinking. Stories are vehicles through which people form communities of values. As people grow up and enter the community, they adopt the stories of that community. But the world is changing–as it was in Europe and North America during the 19th Century–and a given body of stories becomes less and less suitable for the community function, but still, people make things fit. The genre “stretches and strains” and people adapt themselves to the stories at hand, though perhaps with some discomfort.

The history of astronomy has a crude but useful analogy. The geocentric model of the universe put the earth at the center. In order to incorporate new observations about planetary movement into the model, astronomers had to keep adding epicycles to the model. Thus over time the model became more and more complex as more epicycles were added. At some point Copernicus said “Enough!” and created a new model, one centered on the sun. The number of epicycles dropped dramatically, though it didn’t altogether disappear.

So, I say, it went with novels. At some point the youngest members of the community discover some texts of a new kind that they find more congenial. Wham! So they defect from the old community and gather around a new set of genres. And the process continues. At first these new genres are well suited to the rising community of readers. But it time, it will be less and less suitable.

This, of course, implies that there’s some standard of fitness against which texts are being measured. What is it? Whatever it is, though, it’s an aesthetic standard.

I want to say a bit more about the third paragraph in that passage.

The Child is Father to the Man

What one learns early in life sets limits on what one can learn later. Language is a good example. Once you’ve internalized the sound system of your native tongue (or tongues) it becomes difficult to learn the sound system of a different language later in life. And so it goes with many things.

So, we have adults of Generation Q and their children. The culture, broadly considered, of GenQ adults is the matrix in which their children, call them GenR, are raised. Let us assume that, for whatever reason, this matrix is different from that in which GenQ adults were raised as children (by their GenP parents). It then follows that the GenR children will grow up to have cultural preferences that are different from those of their GenQ parents. Hence they will prefer different kinds of novels.

This implies, of course, that the matrix they create for their GenS children will be different from that which their GenP parents created for them. And so, when those children become GenS adults, they will, in turn have cultural preferences that are different from those of their GenR parents, thus: 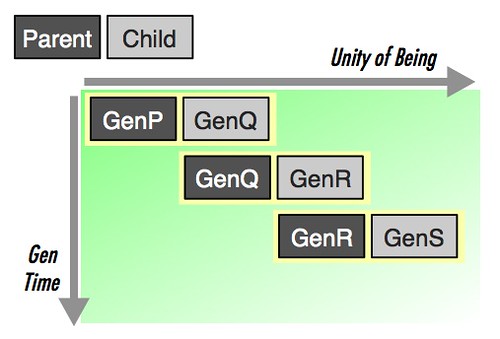 Roughly, we can think of the whole space as cultural space. Unity of being is whatever it is that brings about closure in a work of art; it’s related to beauty, but not quite the same. Though I’ve been blogging about it for awhile, it’s still somewhat obscure.

Likewise, gen time (generational time) is something like the succession of generations but not quite. It is internal to the cultural system and arises from the dynamics of that system though the ‘Wordsworthian dynamic’: the child is father to the man.

For example, think of musical styles in the 20th century. Young adults in the first quarter of the century were raised on ragtime and minstrelsy, but their children embraced hot jazz and swing. When they in turn had their children after World War II, those children adopted rock and roll as teenagers. Their children, in turn, adopted hip-hop.

As for just why this “generational ratchet” should move in a consistent direction, that’s still a mystery. I assume that’s a mystery about how culture moves through a “feature space” whose boundaries are ultimately set by human biology. Even granting the assumption, it’s still pretty much of a mystery.

Correction: One of the figures in the 3QD post is incorrect. Here’s the correct figure: 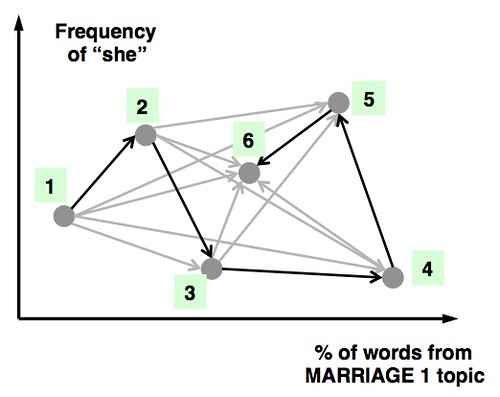 The figure in the post had the edge between 4 and 6 pointing in the wrong direction.

1 thought on “The Direction of Cultural Evolution, Macroanalysis at 3 Quarks Daily”