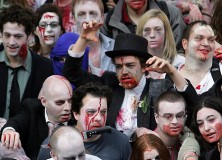 PZ Myers points to a TED video of Philip Zimbardo (see below) that links the declining academic performance of men with arousal addiction: here, the transition from boys to men in our modern society is characterised by “digitally rewired” brains that are in search of constant arousal etc etc. Like Myers, I’m sceptical of these claims, but I think they are certainly worth investigating, just not in the fashion employed by Susan Greenfield (you know, she of pseudo-neuroscientific fame). What I would like to see answered is: Do all Internet-influenced societies see this general trend of declining academic performance in men?

Another research question we might want to test, or control for in our hypothetical study, is whether or not there is a correlation between the number of female teachers and male academic performance? I haven’t bothered to look into the literature on this, so maybe a study has already been done, but female teachers certainly appear to outnumber their male counterparts in many corners of the globe (especially in primary school education). In Wales, for instance, I was astonished to find that 74.7% of teachers are female. My point: there might be a more obvious underlying cause as to why women are outperforming men, other than the rise of the zombie-generation of internet-addicted gamers. Still, I’m going to go with the cop-out approach and claim there are numerous factors underpinning male achievement (or lack of) in academia and beyond. I just wanted to point out that, in any study purporting to provide answers about declining educational attainment, you first really need to look at who is doing the teaching.

N.B. Since I started writing this post an interesting article has appeared: The Neural Basis of Gaming. Here is the abstract:

2 thoughts on “The Declining Academic Performance of Men”