I recently came across a post over at GNXP on the rise and crash of civilizations. It’s a really interesting discussion on a new paper by Currie et al. (2010), Rise and fall of political complexity in island South-East Asia and the Pacific. Here is the abstract:

There is disagreement about whether human political evolution has proceeded through a sequence of incremental increases in complexity, or whether larger, non-sequential increases have occurred. The extent to which societies have  decreased  in  complexity is  also unclear. These  debates have  continued  largely  in the absence  of rigorous, quantitative tests. We evaluated six competing models of political evolution in Austronesian-speaking societies using phylogenetic methods. Here we show that in the best-fitting model political complexity rises and falls in a sequence of small steps. This is closely followed by another model in which increases are sequential but decreases can be either sequential or in bigger drops. The results indicate that large, non-sequential jumps in political complexity have not occurred during the evolutionary history of these societies. This suggests that, despite the numerous contingent pathways of human history, there are regularities in cultural evolution that can be detected using computational phylogenetic methods. [My emphasis].

I don’t have much to add on the subject as I think Razib covered most of the relevant points, plus I haven’t even finished reading the paper yet (I’m hoping to get back into research blogging later this week). I will, however, post one of their figures that shows the dynamic between the rise and fall of political complexity, and how it shows regularity (btw, RJMCMC means Bayesian reversible-jump Markov chain Monte Carlo… if that helps you in any way): 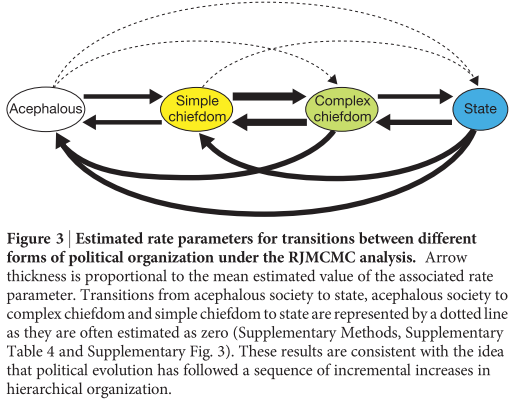