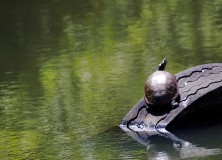 The rather different conception of memes that I have been arguing in these notes is simply unthinkable in those terms. If memes are (culturally active) properties of objects and processes in the external world, then they simply cannot be contained in brains. A thought process based on the container schema cannot deal with memes as I have been conceiving them. END_OF_DOCUMENT_TOKEN_TO_BE_REPLACED