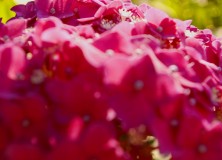 As its name indicates, this post builds on Wild Replicator’s Got Funky Rhythm, Part 1. I want to call your attention, in particular, to the next to the last section, Becoming Memetic. There I trace, albeit sketchily, the history of Rhythm Changes. The point is that Rhymthm Changes didn’t exist as a memetic entity in 1930, when George Gershwin wrote “I Got Rhythm.” Just when the chord changes had become differentiated from the song itself is not clear. But it had certainly happened, at least in the jazz world, by the mid 1940s. Thus, it is not as though certain patterns are essentially memetic while others are not. It’s a question of how the patterns function in the cultural system.

In the previous post I took a look at Rhythm Changes, a memetic entity that has played an important role in jazz and, in particular, in bebop. FWIW, Rhythm Changes has also been used in the theme song for well-known some well-known cartoons, Woody Woodpecker and The Flintstones. In this post I want to do several things:

Taken together those discussions flesh out the role of memetic elements in music systems in the large. I conclude by

I Got Rhythm, Whole

As I’ve indicated, Rhythm Changes is derived from, abstracted from, George Gershwin’s “I Got Rhythm.” Now let’s think about the whole tune, not just its harmonic trajectory, i.e. Rhythm Changes. In addition to that trajectory we also have a specific melody, the lyrics, the rhythmic framework, and the arrangement. The lyrics are optional; the tune can be performed without them, and among jazz musicians that is the typical, if not universal, performance practice. Note, however, that any consideration of the lyrics brings a whole other memetic field into consideration, that of language. END_OF_DOCUMENT_TOKEN_TO_BE_REPLACED