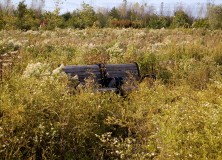 I’d like this to be the last post in this series except, of course, for an introduction to the whole series, from Dan Dennett on Words in Cultural Evolution on through to this one. We’ll see.

I suppose the title question is a rhetorical one. Of course culture evolves and of course we need to a proper evolutionary theory in order to understand culture. But the existing body of work is not at all definitive.

In the first section of this post I have some remarks on genes and memes, observing that both concepts emerged as place-holders in a larger ongoing argument. The second section jumps right in with the assertion, building on Dawkins, that the study of evolution must start by accounting for stability before it can address evolutionary change. The third and final section takes a quick look at change by looking at two different verstions of “Tutti Frutti”. There’s an appendix with some bonus videos.

From Genes to Memes

I’ve been reading the introduction to Lenny Moss, What Genes Can’t Do (MIT 2003), on Google Books:

The concept of the gene, unlike that of other biochemical entities, did not emerge from the logos of chemistry. Unlike proteins, lipids, and carbohydrates, the gene did not come on the scene as a physical entity at all but rather as a kind of placeholder in biological theory… The concept of the gene began not with the intention to put a name on some piece of matter but rather with the intention of referring to an unknown something, whatever that something might turn out to be, which was deemed to be responsible for the transmission of biological form between generations.

Things changed, of course, in 1953 when Watson and Crick established the DNA molecule and the physical locus of genes.

The concept of the meme originated in a similar way. While the general notion of cultural evolution goes back to the 19th century, it was at best of secondary, if not tertiary, importance in the 1970s when Dawkins write The Selfish Gene. And while others had offered similar notions (e.g. Cloake), for all practical purposes, Dawkins invented the concept behind his neologism, though it didn’t began catching on until several years after he’d published it.

The concept still functions pretty much as a placeholder. People who use it, of course, offer examples of memes and arguments for those examples. But there is no widespread agreement on a substantial definition, one that has been employed in research programs that have increased our understanding of human culture. END_OF_DOCUMENT_TOKEN_TO_BE_REPLACED