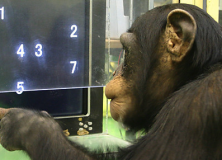 Readers might remember discussion of Stephen Fry’s language documentaries. Most memorable for me were shots of Stephen walking along sandy beaches, waxing lyrical about language. This new documentary about animal intelligence shares some of these elements (sandy beaches, far flung destinations), but crucially, Liz Bonnin is more than an enthusiastic observer – she is not just an engaging television presenter, but a Real Scientist (!!), with a Bachelors in Biochemistry and a Masters in Wild Animal Biology.

In the first show of Super Smart Animals (links to clips below), Liz dealt with chimpanzees memorising sequences of order. This was sold as “a child ape genius” solving an intelligence test, and we were told that Ayumu can outperform humans. In less than half a second, Ayumu can commit to memory the order of numbers on a screen. Liz was pitted against Ayumu, attempting to memorise the location of ordered numbers, having seen them for just 60 milliseconds. Not even the blink of an eye. Definitely worth finding out more about…

More information about Ayumu and his colleagues can be found here. 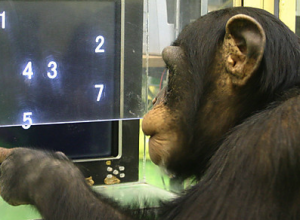 Next came humpback whales – a strange segue, but certainly good to see wild animals. These whales make a “fishing net” out of thin air – by working together to chase fish into a field of bubbles, where they become disoriented and the lunch of some clever whales. It would take hundreds, if not thousands of baitcast reels to catch that many fish. While it’s fascinating to see this kind of tool use, there’s no discussion of how the whales communicate, no discussion of planning, intention etc.

As is common to most science shows, next we had a “pop experiment” –  humans were pitted against orangutans, to test the ”Eureka moment” in problem solving. A treat was placed in the bottom of a tube, with seemingly no way to remove it. Humans tried to use sticks, their hands etc to release the treat, but orangutans used a liquid tool – water – to raise the level of the peanut. This is posed as an example of thinking of the future and planning ahead, but again, not enough was made of this.

Overall, the tool use section was interesting – not just the time-worn examples of termite fishing, but examples of “invisible tools”, using a bait to lure in prey etc. However, it would have been good to see more about the underlying mechanisms (presumably) in place.

I was most excited to see the “creative dolphins” – a group of dolphins in Honduras have been trained using symbols to perform tricks. We’re told that when trainers use the “create” symbols, dolphins really do create something, even in pairs. Again, this section was somewhat lacking, with no discussion of how dolphins were taught to understand the concept of creativity, nor again, how they interact and communicate to agree on their synchronised creative tricks.

In show two, there was more of a focus on domesticated or captive animals, and communication.

Chaser the border collie was our first star, showing her remarkable memory for toy names. This provided a great opportunity to present Chaser with a novel name, asking her to choose the novel item from a selection of toys (like mutual exclusivity as discussed by Sean), Chaser has to use complex mental manipulations to work out which item she has never seen before, matching it to the novel name.

We also saw a “town’ of prairie dogs in the States. Calls were elicited by dragging stuffed predators across the townland, and recorded for analysis. This revealed distinct calls for coyote and badger, with different responses accordingly. This is where terms like “language”, “communication”, “words”, “conversation” started to be thrown around willy-nilly. And there was a truly weird discussion of “Equus”, a wild mustang “complex silent language… a series of gestures that mean something, like signing for the deaf”. Hmm, I’m reserving judgement.

Capuchins were the next stars for me – we saw that white-faced capuchins develop trust and cooperation through eye-poking. That’s right, they poke each other in the eye. The story goes that if I let you stick your finger in my eye, I’m proving that I trust you, and surely you’ll trust me in battle. An unusual form of bonding, but perhaps no stranger than office-based “trust exercises” – trust falls, anyone?  Cooperation is also seen in elephants, who must both pull on a rope to pull a table of treats towards them.

Perhaps feeling they hadn’t quite filled the cute quota with baby elephants playing football, the producers next showed us meerkat babies’ begging calls. Cut to a playback experiment, and we see that adults respond differently to calls of pups of different ages – for the youngest, presenting a dead scorpion, or a larva, building up through live, disarmed, scorpions, to live, armed ones as the calls mature. A lovely example of animal learning, made only cuter by baby meerkats.

The show (and two-part series) ends with, of course, Kanzi and Panbanisha. Nothing new here, with Liz interacting with Kanzi using the lexigram. It does seem as though Liz is given more opportunity to interact with Kanzi and Panbanisha, going on a car journey and hanging out in the forest, as well as the usual sterile-through-the-glass interaction. Perhaps this is because she is actually a REAL SCIENTIST.

There is a some-what scattergun approach throughout the show, mixing memory, tool-use, communication, problem-solving in just the first few minutes of each show. Some elements of the show are perhaps too quickly dealt with, with little discussion of counter-arguments. But, this is what we’ve come to expect from BBC documentaries. Whilst Liz Bonnin is as I said before, engaging, knowledgeable, and enthusiastic, sometimes she does overstate the case.  But, the show is interesting, nicely filmed, with cool graphics and a guest appearance by John Humphrys.

Keelin Murray is Irish, and thus, gets made fun of for how she pronounces the letter "R". She is doing a PhD in Language Evolution of the University of Edinburgh, looking at ways of testing musical protolanguage theories. She is supervised by Prof. Simon Kirby and Dr. Lars Penke, and is a member of the Language Evolution and Computation Research Unit in Edinburgh. She does not enjoy writing in the third person. View all posts by Keelin