Ok, so I was going to write an essay for my Origins of Language module on this but then got distracted by syntax (again) so I thought I’d put my thoughts in a blog post just so they don’t go to waste. 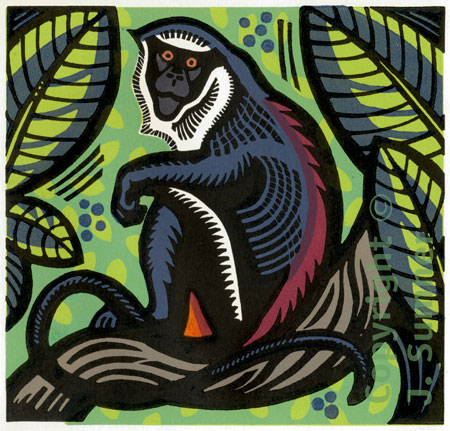 Diana monkeys, like vervet monkeys, use alarm calls to communicate the presence of a predator to other monkeys.

In this post I will explore some of the evidence relating to how sophisticated the Diana monkey’s understanding of the call’s meaning is and also the mental mechanisms relating to the call’s production.

Zuberbühler (2000a) found his Diana monkeys in the Tai National Park. The groups of monkeys were not habituated to human presence. The tests were done only on monkeys which were not aware of the presence of any humans. Speakers were positioned in the vicinty of the monkeys. These speakers were either ‘far away’ or ‘close’, ‘above’ or ‘below’ and the sound emitted was either that of a leopard growling or an eagle shrieking. Each group of monkeys was only tested once.

11 groups of Diana monkeys heard eagle shrieks and 12 hear leopard growls. These were both ‘close’ and ‘far away’ in equal numbers in each condition and also ‘below’ and ‘above’ in roughly equal distribution. (apparently leopards hang around in trees (up to 25m up) and eagles hang around the ground sometimes so this wouldn’t throw the monkeys as much as you’d think).

Diana monkey responses were then recorded. Different calls can be distinguished by a difference in duration (both presyllabic inhalation, duration of syllables themselves, intersyllabic duration and overall duration), frequency of glottal pulses and formant positions and transitions throughout.

In order to assess which of the independant variables had an effect on the calls Zuberbühler (2000a) compared the calls with respect to the above and produced an ‘r squared’ value which is the percentage of variance.

Zuberbühler (2000a) found that not only did the predator’s elevation and distance have an effect on the calls but also the categorisation of “leopard” vs. “eagle”.

So Diana monkeys have internal referential ‘categories’ of both ‘leopard’ and ‘eagle’ but how long do these stay in their minds? Zuberbühler has also done quite a few playback studies whereby he primes the monkeys with a leopard or eagle call (this doesn’t even have to be a Diana monkey call, he has done it with Campell monkeys’ calls too and the Diana monkeys act appropriately (bilingual monkeys!!!) (Zuberbuhler, K. ,2000b)), after five minutes, upon hearing a leopard growl or eagle shriek the monkeys will respond much more quietly. This is presumably because they still have the knowledge that there’s a predator about and so presume everybody still knows from last time and does not want to bring attention to itself when there’s predators about.

Zuberbühler (2000a) himself points out that using leopard growls and eagle shrieks is not the most ideal way of conducting this kind of experiment as neither species would normally emit such sounds when hunting. They are, apparently, more effective than things like motionless predator models though and also allow the experimenter to control variables such as distance, time delay, intensity and duration. Using vocalizations also ensures that all of the Diana monkeys learn of a predator at approximately the same time as each other.

I also have a problem with the priming studies because, although they show the monkeys are reacting differently (more quietly) after a five minute period, I am not convinced that this is evidence of the monkeys holding in their mind knowledge of a specific predator. It may just be as a result that they know that themselves and the rest of the monkeys are in an appropriate safe position away from the predator and so such a strong call may not be needed. That is to say their weak reaction is as a result of their position as opposed to their memory of the last call. I know it’s nice to give the monkey the benefit of the doubt but you have to be objective about these things.