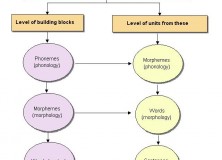 These two assumptions have been challenged on several fronts. First of all, simple combinatorial structure is found in systems of primate vocalisations, albeit restricted to a relatively limited set of signals. Meanwhile, in the Al-Sayyid Bedouin Sign Language (ABSL), the community does not have a conventionalised level of meaningless elements (although it does have compositional structure at the levels of morphology and syntax). These two examples offer important insights into the duality of patterning debate:

The rest of the special issue is divided up between theoretical and experimental/modelling contributions. The abstracts and links to the papers (again, paywall, sorry!) are posted below. In summary, the general picture emerging from these papers is that duality of patterning is not a clearcut design feature of language, and nor is it necessarily a unique property of our capacity for language. Furthermore, we should also show a greater appreciation of the role that cultural evolution plays:

An apparent point of consensus from the papers in this special issue is that we should not see duality of patterning as a feature hard-wired into an innate language faculty, but rather as arising from multiple pressures operating on language as it emerges and changes in socially interacting populations. When we talk about the evolution of this design of language, then, we are referring more to cultural rather than biological evolution […] It appears that duality of patterning is a rather general state towards which sufficiently complex systems of signals evolve for different reasons: distinctiveness, learnability and a tendency to keep meaningful distinctions, while at the same time trying to make one’s utterances sound similar to those of others in the population. Thus, multiple cognitive processes seem to lead to duality of patterning and therefore, there are probably multiple evolutionary pathways that lead to duality of patterning as well. (de Boer, Sandler & Kirby, 2012: 257).

Ladd, D.R. What is duality of patterning, anyway?

The notion of duality of patterning (henceforth DoP), at least for readers of this special issue, is probably most closely associated with Charles F. Hockett’s project of identifying the ‘design features’ of language in order to characterise the ways in which human language is unique among biological communication systems (Hockett 1958: chapter 64; Hockett 1960; Hockett and Ascher 1964). Roughly speaking, DoP refers to the fact that the meaningful units of language – words or morphemes – are made up of meaningless units – phonemes or features – whose only function is to distinguish the meaningful units from one another. Stated this way, the idea seems quite straightforward, and to have it explicitly stated as a property of language seems a useful insight. In fact, though, of all the design features discussed by Hockett, DoP seems to have engendered the most confusion. The idea that meaningful units are composed of meaningless ones seems simple enough, but many complications arise when we look more closely. The goal of this short paper is to document some of the complications and perhaps alleviate some of the confusion.

As more of the world’s languages are described and compared, more absolute universals have joined the class of statistical tendencies. However, few have questioned the universality of the duality of patterning. Following Hockett, most linguists assume that in all human languages, discrete meaningless parts combine to form meaningful units that, themselves, recombine. However, an alternative interpretation, explored in this article, is that duality, like other proposed linguistic universals, is a statistical tendency reflecting a complex set of factors, and most centrally, the need for some minimal number of basic units that can recombine to yield a potentially infinite set of form-meaning correspondences. If this is the essence of duality, then we expect: languages where duality is not a central component of grammar; languages where most, but not all, utterances are decomposable into meaningless phonological units; and different types of phonological building blocks in different languages. These expectations appear to be confirmed by natural language data.

Roberts, G & Galantucci, B. The Emergence of Duality of Patterning: Insights from the Laboratory

The concept of duality of patterning (henceforth DP) has recently begun to undergo new scrutiny. In particular, the fact that Al-Sayyid Bedouin Sign Language (ABSL) does not appear to exhibit a layer of meaningless units (Sandler et al. 2011) casts doubt on the universality of DP as a defining feature of natural language. Why, then, do the vast majority of the world’s languages exhibit DP? Two hypotheses have been suggested. The first is that DP is a necessary solution to the problem of conveying a large number of meanings; the second is that DP arises as a consequence of conventionalization. We tested these hypotheses in an experimental-semiotics study. Our results supported the hypothesis based on conventionalization but were inconclusive with regard to the hypothesis based on the number of meanings. At the same time, the task of measuring DP in an experimental-semiotics study presented interesting challenges, suggesting that the concept of DP may need some overhauling.

Variationist/evolutionary models of phonology assume a causal chain that links biases at the utterance level to the development and consolidation of abstract phonological patterns over time. Some of the properties of linguistic cognition that have been proposed to underlie this chain are (i) storage of experienced detail at multiple levels of description, (ii) feedback between perception and production, (iii) a similarity bias in the production and perception of variation, and (iv) enhancement of cues to potentially ambiguous lexical items in usage. I review evidence for these properties and argue that they interact to provide a pathway for individual usage events to influence the evolution of contrastive sublexcal category systems, i.e phoneme inventories. Specifically, the proposed Network-Feedback model predicts that the organization of sublexical category systems is shaped by a conflict between a general drive toward greater similarity among sublexical categories on the one hand, and a bias toward maintaining contrast between tokens of competing lexical categories on the other. The model provides testable hypotheses about the conditions favoring phoneme merger, chain-shifts, and phonemic splits, and more generally about the influence of lexical contrast on the packing of sublexical categories along gestural/perceptual dimensions. Finally, this pathway of change is consistent with proposals that sublexical categories such as features and segments are not primitives of language, but emerge through more general properties of performance, perception, categorization and learning.

Verhoef, T. The Origins of Duality of Patterning in Artificial Whistled Languages

In human speech, a finite set of basic sounds is combined into a (potentially) unlimited set of well-formed morphemes. Hockett (1960) placed this phenomenon under the term ‘duality of patterning’ and included it as one of the basic design features of human language. Of the thirteen basic design features Hockett proposed, duality of patterning is the least studied and it is still unclear how it evolved in language. Recent work shedding light on this is summarized in this paper and experimental data is presented. This data shows that combinatorial structure can emerge in an artificial whistled language through cultural transmission as an adaptation to human cognitive biases and learning. In this work the method of experimental iterated learning (Kirby et al. 2008) is used, in which a participant is trained on the reproductions of the utterances the previous participant learned. Participants learn and recall a system of sounds that are produced with a slide whistle. Transmission from participant to participant causes the whistle systems to change and become more learnable and more structured. These findings follow from qualitative observations, quantitative measures and a follow-up experiment that tests how well participants can learn the emerged whistled languages by generalizing from a few examples.

Giudice, A.D. The Emergence of Duality of Patterning through Iterated Learning: Precursors to Phonology in a Visual Lexicon

Duality of Patterning, one of Hockett’s (1960) proposed design features unique to human language, refers in part to the arrangements of a relatively small stock of distinguishable meaningless sounds which are combined to create a potentially infinite set of morphemes. Literature regarding the emergence of this design feature is less abundant than that exploring other levels of structure as focus is more often given to the emergence of syntax. In an effort to explore where combinatorial structure of meaningless elements arises the results of two pilot experiments are presented within which we observe human participants modifying a small lexicon of visual symbols through a process of iterated learning. As this lexicon evolves there is evidence that it becomes simpler and more learnable, more easily transmitted. I argue that these features are a consequence of spontaneous emergence of combinatorial, sub-lexical structure in the lexicon, that the pattern of emergence is more complex than the most widely espoused explanation suggests, and I propose ways in which future work can build on what we learn from these pilot experiments to confirm this hypothesis.

2 thoughts on “New Perspectives on Duality of Patterning”