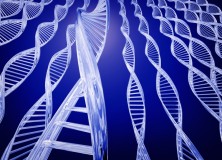 Sorry for the hyperbole in the title, but now I’ve got your attention – Researchers at the University of Edinburgh have found a gene which is implicated in human brain development which humans have, but chimpanzees don’t.

The study compared the human genome to 11 other species of mammals, including chimpanzees, gorillas, mice and rats, and found that miR-941 is unique to humans.

miR-941 is now being slated as a gene that contributed to how early humans developed tool use and language. This gene, in contrast to the likes of FoxP2, has a very specific function rather than being a gene that down regulates other functions. It is said to be the only gene discovered that has such a specific function while only being present in humans. It is active in two areas of the brain that control our linguistic abilities and also our decision making.

The authors estimate that it emerged between six and one million years ago and that it emerged fully functional out of non-coding genetic material (“junk DNA”) in a very short interval of evolutionary time.

I’m sure the studies where they implant it into mice will start soon. Watch this space.