OMG! Monkeys can read! Planet of the apes is coming! Not really. 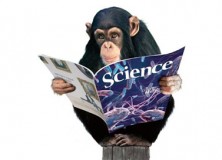 OMG! Monkeys can read! Planet of the apes is coming! Not really. A new paper in Science by Grainger, Dufau, Montant, Ziegler and Fagot at the Aix-Marseille University found that Guinea baboons can be trained to differentiate between four letter English words and nonsense words. One monkey called Dan could recognise up to 300 written words, and by “recognise” I mean he knew those words could give him a treat, not that he could recognise that they signified objects in the world, which is what we mean when we say that a human has “recognised” a word. It’s a minefield isn’t it?

I wonder to what degree this is just a memory test or if the monkeys really are noticing relations between the letters which make up the words, as opposed to the nonsense words. The paper probably answers this. Bloody pay walls… Either way, I don’t think this is evidence to suggest that the role of phoneme-letter matching in humans learning to read should be undermined.

6 thoughts on “Monkeys can read! (not really)”