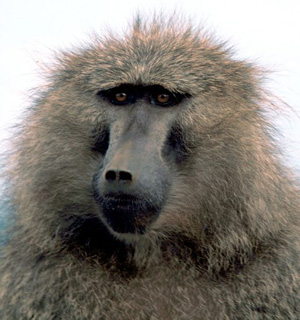 The study was run by Joël Fagot of the Laboratoire de Psychologie Cognitive (CNRS/Université de Provence) and Roger Thompson of the Franklin & Marshall College (United States).

It has been hypothesised in the past that finding relations between relations is an ability only accessible by language, but these new findings with baboons cast doubt on this assertion.

The experiments were carried out on 29 baboons. The baboons were first shown two shapes on a screen. The baboons then touched one of these shapes and two other pairs of shapes appeared on the screen. To be successful at the task the baboons had to touch the pair representing the same relation as the initial pair. So if the first pair matched in a feature the baboon had to choose the pair which also had a matching feature, and avoid the pair where there was no matching feature, in order to gain a reward. This shows the inherent abilities behind analogy.

6 baboons correctly performed the task after thousands of trials of training showing that it is definitely within the abilities of old world monkeys to resolve analogy problems.

The researchers also revisited the same baboons with the same task a year later and the monkeys were much quicker at acquiring the task showing that they remembered what to do.

These results show that language is not necessary for analogy and leaves questions as to what might make this ability adaptive.

3 thoughts on “Language is not necessary for analogy”