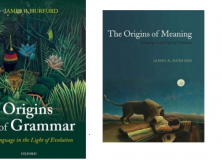 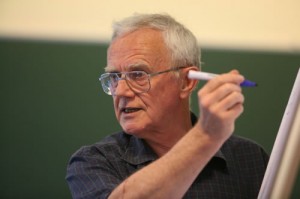 However, with the rise of the minimalist programme (MP) in the 90s these arbitrary properties disappeared from mainstream Generative/MinimalistTheorizing. This means that in MP, Language isn’t that complicated, abstract and arbitrary as it once was. Instead, there is only one central property that is seen as characterizing the core linguistic system: The ability to combine elements via the operation of merge. If we follow this development, this means that Lightfoot’s problem goes away. Hurford argued that in addition, the ability to merge concepts in your head to form more complex conceptual representations obviously is adaptive in private thought so that from his perspective, natural selection now does play a role in this kind of account. The process of Externalization, that is the ability to merge meaning-form pairs into signs in order to express complex meanings in public communication is also obviously adaptive. The ability to use merge in thinking and communication is thus highly adaptive. So even within Generative theorizing, it seems as if natural selection should play a role in accounts of how language evolved. However, Chomsky himself, and many Generativist following him, still insists that natural selection plays no part in the evolution of language. Hurford criticizes this view by stating that a completely non-adaptationist view would predict that people without merge were not evolutionary disadvantaged, which clearly isn’t the case.

Hurford then addressed the Competence – Performance distinction as used in Generative Grammar. In the Generative tradition competence refers to a tacit knowledge of the unlimited possibilities of a combinatorial capacity of the linguistic system. Quite obviously, accidental and temporary performance factors, e.g. distraction, drunkenness, or sudden death, do not factor into the underlying knowledge or linguistic competence. Such practical bounds are not relevant for a theory of competence.

However, Hurford argues that performance is in fact relevant to determining what exactly competence is. Namely, there are also permanent limiting factors, like processing capacity, storage capacity or short term memory in conditions of alertness. These are not accidental and are just as ‘innate’ as any form of Language Acquisition device supposed by nativists.

One example of this is complex birdsong, which is a very regular behaviour based on an innate template and environmental exemplars. That is, its underlying biological foundations seem to function in a very similar way to how language is thought to be organized by some.

However, the template already has limiting factors built into it, like the regularity and numerical upper and lower bounds of the number of repetitions of phrases as well as the overall durations. The fact that these are already built means that in birds, it doesn’t make sense to speak of competence and performance independently of each other. The same, Hurford argues, goes for language.

Hurford thus coined the term Competence+™, as representing a package of competence plus statistical ingredients and the kinds of permanent limiting factors like storage or processing capacity mentioned above.

This then led Hurford to coin the term of UG+™ (Universal Grammar Plus™), which refers to the fact that on this view the formal properties attributed to Universal Grammar (i.e. the ‘language acquisition toolkit’ a child is born with), on the one hand, and memory and processing power, on the other, would not have evolved independently. Instead, memory and processing power are inherently numerically bounded. UG+™, then, represents the coevolved package of formal and numerical information. That is, it refers to the coevolution of form and behavioural dispositions. On this view, a child is born with UG+™ and then acquires or develops Competence+™.

While I am highly sympathetic to Hurford’s overall approach, I have some issues with his way of framing language acquisition and its evolved underlying foundations. I will address these issues in my next post, where I will also finish my summary of Hurford’s comparisons of Extreme Position A and B with regard to their views on the Public Communication vs Private Thought and the question whether evolution has produced a new unique domain or instead has produced an extended interaction of other cognitive domains which together as a cognitive suite make language possible.

1 thought on “Jim Hurford: What is wrong, and what is right, about current theories of language, in the light of evolution?”